Three times champion MI, who have lost five of the six games, have opted to open with West Indian Evin Lewis and Suryakumar Yadav.

Mumbai: Former India batsman Lalchand Rajput believes that Mumbai Indians skipper Rohit Sharma should open the innings for the defending champions as it can give the team a good start. “Rohit is a prolific opening batsman, who has done exceptionally well for India as an opener. So opening and playing free is important for him. If you start well, then you can pile up a big score. You have to open with Rohit, as simple as that,” Rajput told PTI.

“When you bat at number four after losing two wickets that is a different ball-game rather than opening. It (Rohit opening the innings) will help Mumbai, because they will get a good start, as the start is important,” the former Mumbai opener added. Three times champion MI, who have lost five of the six games, have opted to open with West Indian Evin Lewis and Suryakumar Yadav, with wicket-keeper Ishan Kishan coming one-down. Rohit has been coming to bat at number four.

“But Rohit is such a player, once he gets 30s, he makes it big,” Rajput, a domestic bulwark, said. In the six games played so far, except his match-winning knock of 94 against the Royal Challengers Bangalore, Rohit has not even gone past the score of 20. Rajput, former coach of Afghanistan, also said that West Indian all-rounder Kieron Pollard has been “struggling” and MI can look at South African J P Duminy as an option.

“If a certain player is not doing well, you have to look at it. He (Pollard) is not in good form and has not (performed) well. It is time that they (MI) look for another options and (JP) Duminy is another option,” added Rajput.

Thirty-year-old Pollard has miserably failed with the bat as his highest score in the five games this season has been 28.

MI will now clash with Chennai Super Kings on Saturday in Pune and will seek to take revenge after their defeat against the Mahendra Singh Dhoni-led side at the Wankhede Stadium here. No Champions Trophy in 2021; India to host World T20 instead 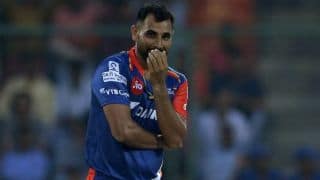