IPL 2018: RR stay in hunt of playoffs with victory, RCB knocked out

IPL 2018: RR stay in hunt of playoffs with victory, RCB knocked out

Rajasthan Royals (RR) kept their Playoffs chances alive by defeating Royal Challengers Bangalore (RCB) in Match 53 of Vivo IPL 2018. Shreyas Gopal (4-0-16-4) took charge in the middle overs, taking wickets and holding up run flow at the same time. He was assisted well by Ish Sodhi and the seamers. AB de Villiers fought hard for his sixth half-century of the season but could not manage to take RCB home as he ran out of partners. With this defeat, RCB have been eliminated from IPL 2018.

RCB were going well at 75 for 1 after 9 overs. However, the wicket of Parthiv Patel opened the floodgates, and they collapsed to 98 for 6 under 13 overs, courtesy Gopal & co. The RR spinners made the most on the slow pitch. Gopal bowled beautifully, often beating batsmen in both flight and turn.

However, he owes a part of his success to Heinrich Klaasen, who stumped Parthiv (33), Mandeep Singh (3) and de Villiers off him. Klaasen became the third wicketkeeper (after MS Dhoni and Robin Uthappa) in IPL history to take 3 stumpings in a match. Klaasen later caught Sarfaraz Khan brilliantly off Ben Laughlin to become the first RR wicketkeeper to effect 4 dismissals in a match.

Virat Kohli‘s struggle against the spinners continued. This was the eighth time in 11 innings that he fell to one. Krishnappa Gowtham opened the bowling for RR and bowled a tight first over conceding only 2 runs. Kohli struggled against him, went for a swipe in the third over, and was bowled.

Man of the Match: Shreyas Gopal. 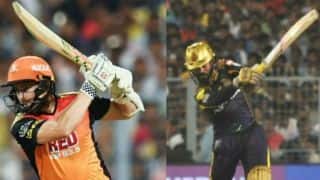