Trent Woodhill cites reasons as to why Virat Kohli, AB de Villiers are the Rafael Nadal, Roger Federer of cricket.

Kohli and de Villiers have the ability to stand up and deliver to rescue their respective teams in international matches. They did so during the three-match Test series. Kohli was the top-scorer with 286 runs at 47.67 while de Villiers held the second spot with 211 runs at 35.17. Nadal and Federer have stood out in different tournaments as to why they are the best: Nadal exceeds himself in clay court (Roland Garros). Federer rules grass court (Wimbledon). US Open and Australian Open has produced mix results when it comes these stalwarts of tennis.

Federer and Nadal might be competitors on field but when it comes to off the tennis court, the duo are the best of friends. They have played for each others charity organisations. They have played together in the Laver Cup representing Team Europe.

Similar has been the case between Kohli and de Villiers. The duo might be playing for their respective countries at the international arena. But when it comes to VIVO IPL 2018, de Villiers and Kohli bring their best game forward together while playing for Royal Challengers Bangalore (RCB).

Woodhills lays out another point on what made him draw Kohli-de Villiers comparisons with Nadal-Federer: “It s tough to pick who is the best of them. AB and Federer share a similar DNA I think, and the same with Nadal and Kohli. The point s never dead for Nadal, and the point s never dead for Virat. And AB, he finds a way as Federer does, in conditions where others struggle.”

Apart from the comparisons, Woodhill particularly believes Kohli’s passion towards fitness is what makes him a great sportsman: “(Kohli) is the most impressive sportsman I ve had the pleasure to work with in any sport. He s definitely fitter than he s ever been. What that allows you to do is under pressure, you re able to replicate technique and replicate movement patterns. So he s less likely than others to play a lazy shot or not execute the way he d like because his fitness and his mind is so sharp. And that s where that brilliance lies.” Sanju Samson: IPL an ideal platform for batsman to express oneself 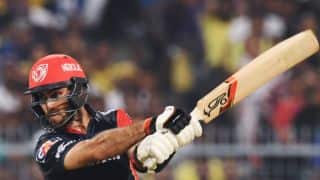