A win for Delhi Capitals will solidify their chances of a top-two finish, a win for Rajasthan Royals will keep their slim playoff hopes alive.

Both teams are playing for different reasons. For Delhi Capitals, a big win will ensure a top-two finish which will give them two shots (if they lost the first qualifier) at making the IPL 2019 playoffs. A defeat would mean they finish third unless Mumbai Indians lose their final match and that too by a massive margin.

On the other hand, Rajasthan Royals desperately need to win to keep their playoff hopes alive. Apart from winning, they will be praying for some favourable results – Sunrisers Hyderabad, a playoff contender, lose to Royal Challengers Bangalore and Kolkata Knight Riders, another playoff contender, also lose to Mumbai Indians. So, it’s a complex scenario for the inaugural IPL champions.

Back at the Kotla, DC may want to drop Chris Morris for Sandeep Lamichhane to add a spinning option.

With Steve Smith back in Australia, the captaincy will go back to Ajinkya Rahane. Smith’s place in the team looks set to go to fellow Australian Ashton Turner, unless Ish Sodhi gets the nod to bolster the spin attack.

DC vs RR PREDICTION: Given DC’s record at home this season, they wouldn’t be too confident of finishing the league stage with a win considering their opponent boast of legspinner Shreyas Gopal someone who can exploit the slow conditions to his advantage. But they lost their previous match, against Chennai Super Kings, and will be itching to return to winning ways. RR have won their previous two completed matches and were well on the way of winning a third one before rain poured cold water on their hopes against RCB. Despite the CSK setback, DC have been on the rise and start favourites to win. 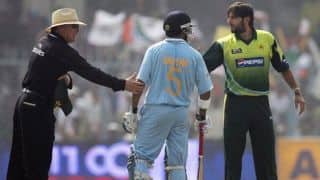 “Will personally take you to psychiatrist,” Gambhir responds to Afridi’s comments Delhi Capitals vs Rajasthan Royals, IPL 2019, LIVE streaming: Teams, time in IST and where to watch on TV and online in India