Delhi Capitals (DC) held their nerve to edge out Sunrisers Hyderabad (SRH) in the Eliminator and seal a place in the Qualifier 2 of IPL 2019.

While Sunrisers Hyderabad (SRH) did their best to seal a coming from behind win, Delhi Capitals (DC) managed to edge out Kane Williamson and Co in the Eliminator of the Indian Premier League (IPL) 2019 in Visakhapatnam on Wednesday.

SRH skipper admitted that it was a little bit frustrating to lose games from such situations.

It was one of those surfaces that produces such close matches. I believed we had a competitive total after the first half, I knew it would be a tricky chase after the powerplay, with such totals there are small margins, we have been in a position of strength before and haven’t nailed it, today was another such day, a little bit frustrating, said Williamson.

SRH, after put in to bat, were restricted to 162/8 despite a brisk start as Keemo Paul and Ishant Sharma shared five wickets between themselves.

DC too enjoyed a solid start and were in with a chance to seal a comfortable win despite the middle-order wobble. However, SRH kept themselves in the game after Rishabh Pant’s fall. But it was DC who kept their nerve to seal a thrilling win.

Williamson said that the Shreyas Iyer-led side deserved to win the game and believed that they will go all the way.

Delhi played very well, they are a strong outfit and I think they deserved this win, think they will go all the way. We believed it was a winning total and it looked like it for a long time, they started well and had all the momentum, they had some quality players, as expected on this wicket we squeezed them back and got ourselves ahead, we weren’t very clinical with the catching or in our bowling, we weren’t great today. It wasn’t our best performance, a few things needed to be changed and it could have been a winning total, said Williamson.

“(David) Warner and (Jonny) Bairstow were brilliant when they were here and they were prolific with the bat, we were without them for the last 2 or 3 games, but we still played very well despite missing them, just not quite getting across the line today. We can reflect back on some games, we had similar matches last time around and we were on the right side of those, not this time though, we were on the underside of those totals. We are building well as a franchise and the development process will have to continue,” concluded Williamson. 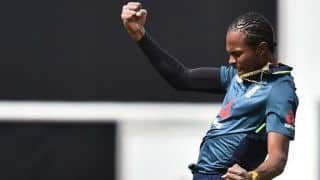