Asked whether he will be seen in action in the IPL next year, the former India captain replied: “Hopefully, yes.”

Chennai Super Kings captain Mahendra Singh Dhoni summed it aptly after his side went down by a slim one run in a thrilling Indian Premier League (IPL 2019) final against Mumbai Indians at the Rajiv Gandhi International Stadium in Hyderabad on Sunday.

“Both teams made a lot of mistakes, the team that made one lesser mistake won,” Dhoni said at the post-match presentation ceremony.

Elaborating further on the final which was viciously oscillating keeping fans enthralled till the last ball, Dhoni reckons that his batting side need to step up.

“As a team we had a good season. But we need to go back and reflect on how we reached the finals. It’s not one of those years where we played really great cricket to reach here. The middle order wasn’t great, and today it was very funny as to how both these teams were only passing on the trophy from one team to the other,” he said. (ALSO READ: Key moment was to get Dhoni run-out: Mumbai Indians team icon Sachin Tendulkar)

“I think the bowlers did really well for us, even today it was definitely more than a 150 wicket. They kept performing and kept getting wickets whenever needed. Whenever they restricted the opposition to a low score, somebody stepped up with the bat, chipped in and that’s how we’ve won most of our games.

“We have to go to our drawing board, and there is no real time for that now. We need to go into the ICC World Cup 2019 and after that we need to see the gaps that we can fill. Nothing against the bowlers, it’s the batsmen who need to step up.”

Asked whether he will be seen in action in the IPL next year, the former India captain replied: “Hopefully, yes.” 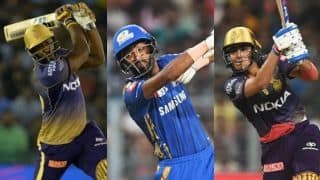