Mumbai Indians allrounder Kieron Pollard has been fined for showing dissent at an umpire's decision.

Mumbai Indians allrounder Kieron Pollard has been fined for showing dissent at an umpire’s decision during the IPL 2019 final clash against Chennai Super Kings in Hyderabad on Sunday night.

Pollard has been fined 25 percent of match fee for violating the IPL Code of Conduct for Players and Team Officials.

He has accepted the sanction.

The incident occurred during the final over of MI innings, bowled by CSK’s Dwayne Bravo. Pollard was repeatedly shuffling towards the off-stump and Bravo countered by bowling even wider, outside the tramline which serves as a guide to judge wide balls.

Thrice is happened and on all three occasions umpire Nitin Menon ruled the decision in favour of Bravo. However, the third time, Pollard lost his cool as he threw the bat in the air before catching it.

As Bravo was in his runup and about to delivery the fourth ball, Pollard bizarrely started walking towards the side of the crease before nearly taking the guard outside the pitch leaving everyone amused.

Watching Pollard pull off the stunt, the two on-field umpires approached Pollard reprimanding him for the act. Pollard smashed an unbeaten 25-ball 41 to take MI to 149/8 which eventually proved decisive. 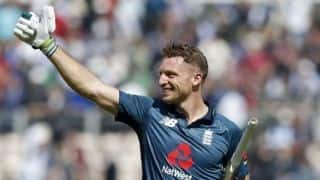 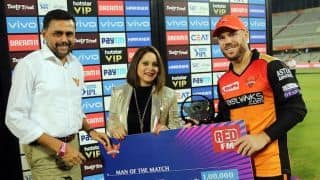