While Dhoni's game awareness is well-documented, Rohit, who has also led the national team as a stand-in skipper, has been incredibly successful.

Being “switched on” from the first ball coupled with situational awareness has made MS Dhoni and Rohit Sharma the two most successful IPL skipper, reckons the iconic Sachin Tendulkar. (ALSO READ: IPL Final Live Updates)

While Dhoni’s game awareness is well-documented, Rohit, who has also led the national team as a stand-in skipper, has been incredibly successful. He has won all the three IPL finals he has captained till date. (ALSO READ: Rohit calls IPL good preparation for World Cup)

“I think they (Rohit and Dhoni) are pretty sharp. MS has been leading for a number of years and Rohit has also been incredibly successful. So the ability to read the game and having that peripheral (situational) awareness makes them special captain,” Tendulkar said Sunday before the start of the IPL final.

“With MS we have seen his ability to read match situations and even Rohit is proving that (he has that awareness). Both captains are on toes and switched on from ball one.”

Tendulkar also lauded the young talent that has come through along the years, growing up on the pace and frenzy of T20 cricket. “Everyone is enjoying the skills of the new generation and their ability to clear the field. Amazing talent on display and the younger generation growing on IPL, it’s contagious,” said Tendulkar, who played six seasons of IPL till 2013.

Twenty20 is a format where catching the opposition off-guard is more important than just trying to play correct cricket, he weighed in.

“It’s about adaptability at the given moment in this format. How could you make the most of the six balls that you face or which you are going to bowl. It’s not always about being correct but catching your opposition off-guard and being a step ahead of opposition as far as planning is concerned,” said the former India batsman. 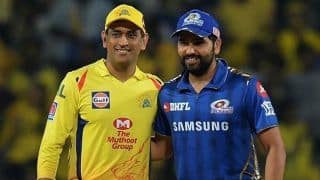