Chennai Super Kings all rounder Dwayne Bravo had been ruled out for two weeks owing to Grade 1 hamstring tear, as confirmed by CSK batting coach Michael Hussey on Friday.

“It’s going to cause a little bit of rejigging of the team but I am sure we are going to be able to put together a very strong team, sad Hussey. It’s a big loss but we have had these challenges in the past. Let’s hope we can do this again .

Bravo had been instrumental in team s three straight wins, but was taken for 29 runs in the last over by Hardik Pandya in Chennai fourth match against Mumbai Indians, which they lost by 38 runs. Bravo, who came out to bat, was visibly struggling to run between the wickets on Thursday.

Hussey stated that with Bravo not available the team is looking at options to fill in the death bowler s role.

“I am sure MS [Dhoni] and [Stephen] Fleming will be looking at Scott Kuggeleijn and assessing his death bowling skills. We’ve got Shardul [Thakur]. Mohit [Sharma] can bowl at the death as well. It’s about assessing the conditions. If it’s turning, I think one of the spinners can bowl at the death. I am sure there will be a lot of strategic thinking and it’s a key area of the game,” said Hussey.

New Zealander Scott Kuggeleijn was roped in as a replacement for South African Lungi Ngidi, who was ruled out of the 2019 season owing to injury. 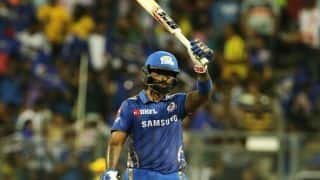