The young Windies pacer ended with sensational figures of six for 12 in 3.4 overs.

Alzarri Joseph had a ‘dream’ start to his Indian Premier League (IPL) career after claiming the best bowling figures in the competition’s history.

The young Windies pacer ended with sensational figures of six for 12 in 3.4 overs, bettering the effort of Pakistan pacer Sohail Tanvir, who had taken six for 14 in the inaugural IPL edition in 2008, on Saturday night.

Replacing Lasith Malinga in the Mumbai Indians’ playing XI, Joseph’s first over in IPL was a wicket-maiden in which he removed the dangerous David Warner.

“I know we had a game to win and I was focused on that. The boys are playing well and putting in a lot of hard work,” said the 20-year-old when asked why he did not celebrate Warner’s wicket.

“It is a dream. I could not have asked for a better start. I just backed my plans and it worked. My plan was to keep it simple and back myself,” said Joseph. 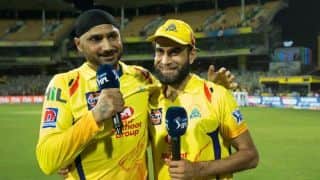