CSK will launch their bid for a record fourth Indian Premier League title when they meet RCB in the season opener on Saturday.

Chennai Super Kings (CSK) will launch their bid for a record fourth Indian Premier League (IPL) title when they kickstart their campaign against Royal Challengers Bangalore in the season opener on Saturday.

CSK returned to the IPL fold after a two-year suspension to win a record equalling third title beating Sunrisers Hyderabad in what was their seventh final appearance at the annual league.

Allrounder Dwayne Bravo who has been an integral part of the Chennai setup feels that keeping faith in a certain group of players over the past seasons has helped the team achieve consistency across 10 years.

“Keeping the core group and retaining most of the players has been CSK’s strength over 10 seasons. It’s a belief and a reward at the same time,” Bravo was quoted as saying by CSK’s official website.

CSK, packed with several veterans, was termed as the Dad’s Army which Bravo says proved to be the ultimate difference between them and the other teams. “We were aware for the name-calling, but you can’t beat experience, no matter. The way CSK went about picking the squad at the auction – experience along with some talented young players. The core of the team was kept, and that made a huge difference. Last year everyone doubted us, and we went on to win the crown,” he said.

He added, “Every season is different, this is a new edition and we have come to win. Last year is long gone.”

Bravo feels that CSK, who will be playing their home matches at the M Chinnaswamy Stadium, feels that it will be difficult to beat them at the venue. “I think our fans have a big part to play, they are very passionate and they keep supporting us, and when visiting teams come here, they feel the pressure. It’s not going to be easy to come here and beat us,” he said. 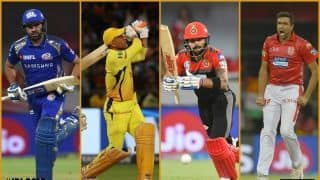