Hardik Pandya s 34-ball 91-run blitz was not enough as Mumbai Indians (MI) lost against Kolkata Knight Riders (KKR) by 34 runs in the 47th match of the Indian Premier League (IPL) 2019 at the Eden Gardens in Kolkata on Sunday.

MI were chasing a big target of 233 and lost four wickets in first ten overs. While Pandya tried his best, it was too little too late for the visitors. MI skipper Rohit Sharma lauded Pandya but rued that his team did not start well in the chase.

You gotta start well which didn’t happen for us. We kept losing wickets which added more pressure towards the end. If somebody would have played a hand with Hardik, we lost by 30 runs, you never know, said Rohit.

When you have a score like that you have to believe you can chase it down otherwise it is not possible. You need few of the guys to put their hands up, not one guy can take you through. We needed partnerships, someone to bat longer with Hardik. Credit to him, magnificent effort, added Rohit.

Rohit also conceded that his team tried everything to stop the juggernaut which commenced right from their openers Shubman Gill, who scored 76, and Chris Lynn, who scored 54, before Andre Russell hammered an unbeaten 80 off 40 balls.

However, he made it clear that he is not worried about his bowling unit.

We tried everything we could. We bowled those yorkers, we bowled the bouncers, tried our variations. Got to give credit to their batters, Lynn set the tone, Gill batted really well and Russell finished it off. This is a learning for us. We will find some answers going forward. Today was a testing time for us, but I am not really worried how the bowling unit will come back from this, said Rohit.

(We) Have to regroup quickly now, we are playing two home games and know the conditions well. As a team we have done some right things and we have to believe in our abilities. You got to stay positive and look forward to the next game, concluded Rohit. 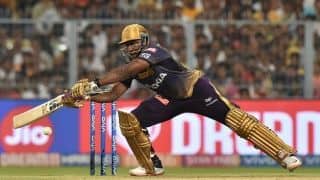