RR have moved up one place to seventh, while KKR remain at sixth spot on the IPL table.

In match 43 of IPL 2019, Rajasthan Royals defeated Kolkata Knight Riders by three wickets to move up one place on the IPL points table.

Chasing a target of 177 after KKR skipper Dinesh Karthik hit 97* off 50 balls, Rajasthan won with four deliveries left in the game.

Headlining their win was the 17-year-old Assam allrounder Riyan Parag, who scored 47 off 31 balls to leave his RR captain Steve Smith very impressed. And in his final match of the IPL, Jofra Archer smacked an unbeaten 27 off 12 ball including the winning six in the final over. 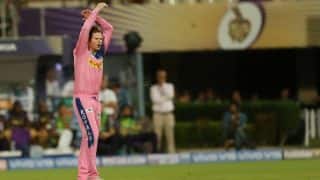