While a defeat in their final league stage game did not do much harm to Chennai Super Kings (CSK), who had already made it to the IPL 2019 playoffs, Kings XI Punjab (KXIP) made sure they ended their season on a happy note as they beat MS Dhoni and Co by six wickets to sign off in style, playing on their home ground, at the PCA-IS Bindra Stadium in Mohali on Sunday.

Here are the talking points from the KXIP versus CSK game:

Sam Curran-Mohammed Shami show
There had been a few disappointing days for him in the IPL 2019. But Sam Curran has enjoyed more success than failures in his maiden IPL season. The England pacer, along side Mohammed Shami, was one of the stars with the ball for KXIP and scalped three wickets. While he went for 35 runs, he dismissed Shane Watson, Suresh Raina and Faf du Plessis.

Then, there was Shami. The right-arm pacer bowled three overs, with one of them being the final over of the innings. However, he showed why experience matters in the T20 format. He denied MS Dhoni a chance to swing his arm and conceded just five runs in the 20th over and scalped two wickets – Ambati Rayudu and Kedar Jadhav – and helped KXIP deny CSK a big finish as the home team conceded just 20 runs in the last three overs to restrict CSK to 170/5.

“Last game in the league stage, gives us an opportunity to sort everything out before the important part of the tournament gets in,” MS Dhoni had said at the toss. And if CSK had to worry about something, it was the form of their openers – Shane Watson and Faf du Plessis.

While Watson did not enjoy a good outing, Faf returned to form in some style. Although the South African skipper missed out on a hundred, he scored 96, a welcome sign for the defending champions as they gear up for the playoffs.

While the form of Ambati Rayudu and Kedar Jadhav would still be a concern for Dhoni and Co, the team would be pleased to witness Raina continuing his batting form. The left-hander scored 53 as he and Faf added 130-run stand for the second wicket.

Although he was a little watchful, playing five dot balls, at the beginning of his innings, he scored 52 in the 14 balls as he went after the Indian veteran Harbhajan Singh.  Such was his onslaught that the off-spinner went for 41 runs in his two overs. While Harbhajan eventually dismissed the KXIP opener, he had by then scored 71. 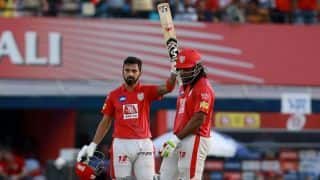 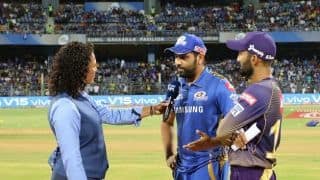