While MI will be keen to maintain the winning momentum, RR seek to end the losing streak.

Ajinkya Rahane has won the toss and Rajasthan Royals (RR) have elected to bowl against Mumbai Indians (MI) in the 27th match of the Indian Premier League (IPL) 2019 at the Wankhede Stadium in Mumbai on Saturday. (IPL 2019, MI vs RR: FOLLOW LATEST UPDATES)

RR have made a couple of changes to their team as Liam Livingstone replaced injured Ben Stokes and K Gowtham is back in the playing XI. For MI, Rohit Sharma, who was rested in the previous game as a precautionary measure, is back to lead the side. He replaced Siddhesh Lad in the team.

Rahane said that his team is bowling first as the pitch will get better under lights. The Rajasthan franchise, Rahane said, is playing some good cricket but need to up their game in crunch situations.

‘We will bowl first. Not sure how this pitch will play, but it will get better under lights. We have been playing some good cricket, but in T20s, we need to play well in the crunch situations,” said Rahane. (ALSO READ: Mumbai Indians aim to continue winning momentum against Rajasthan Royals)

“We have a few changes. Stokesky is injury and replaced by Liam Livingstone is in, Gowtham is back as well,” added Rahane.

Rohit, unlike Rahane, felt that he pitch should not be a factor.

“It’s a 4 PM game, should help the spinners. The pitch shouldn’t be much of a factor. We need to play some good cricket, we are in a roll as a team and need to continue doing it,” said Rohit.

“One change for us, I am back in place of Siddesh, who is unlucky to miss out. He looked good the other day, but this is a long tournament and he should get more chances in the future,” added the MI skipper.

MI, the three-time champions, are coming into this game on the back of a sensational win, set up by Kieron Pollard s 31-ball 83-run blitz. RR, meanwhile, have lost their last game after a last-over drama in Jaipur against MS Dhoni-led Chennai Super Kings. (FULL POINTS TABLE) 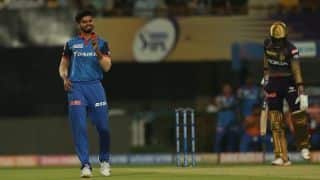