Buttler walked dejectedly back to the pavilion after an argument with the Punjab captain.

Spinner Ashwin took the bails off at the non-striker’s end while Buttler was backing up, with the controversial move overshadowing his side’s 14-run victory over Rajasthan Royals and the return to IPL cricket of Australia’s Steve Smith.

The term “Mankad” — used when a bowler runs out a non-striker before delivery — was coined 70 years ago when Indian all-rounder Vinoo Mankad twice ran out Bill Brown at the bowler’s end during India’s tour of Australia in 1947. (READ: It was instinctive: Ashwin on mankading Buttler)

It is considered to be against cricket’s spirit of fair play and Buttler, who scored 69 off 43 deliveries, walked dejectedly back to the pavilion after an argument with the India bowler. (READ: Good to start on a positive note: Chris Gayle)

“If @josbuttler had been warned well that s fine … if he hasn t and it s the first time I think @ashwinravi99 is completely out of order … watch how often this happens from now on !!!!!!! #IPL”, he wrote on Twitter.

Buttler’s Rajasthan team-mate Jofra Archer, who will soon qualify to play for England, also took to Twitter to express his anger.

Archer wrote of Ashwin: “You show no confidence in yourself or your bowlers to get the job done so you resort to that ? #greatcaptaincy”

Ashwin was unrepentant, however.

“No real argument to that. I didn’t even load and he left the crease. It’s always been my take on it, because it’s my half of the crease,” he said.

Royals skipper Ajinkya Rahane played down the controversy and said his team will take it “sportingly”.

“We are not supposed to comment on a controversial issue. The match referee will take the call,” he said. 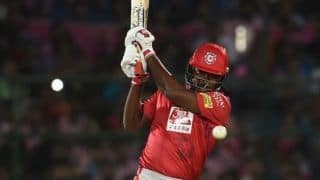