CSK were back to winning ways after a phenomenal display in the death overs saw them defend 160.

Chennai Super Kings were back to winning ways after a phenomenal display in the death overs saw them defend 160 and beat Kings XI Punjab by 22 runs on Saturday. Half-centuries to KL Rahul and Sarfaraz Khan had led KXIP’s charge but either batsmen failed to accelerate towards the end. With 46 needed off the last three, Scott Kuggeleijn, who had conceded 27 in his first two overs, gave away just seven and accounted for the wicket of a set Rahul.

In the penultimate over, Deepak Chahar lost his line and length and sent down two waist-high full-toss but wasn’t taken off the attack since both were outside off. What transpired from there on could very well be the turning point. The remaining over, he gave away five singles and sent David Miller’s leg stump cartwheeling. Kuggeleijn returned to provide the finishing touches as CSK reclaimed the No. 1 spot on the leaderboard.

Sarfaraz and Rahul had come together after Harbhajan Singh had landed two early blows in a wicket maiden over to KXIP. Bowling the second over, the offspinner had Chris Gayle out caught behind – his third dismissal of the West Indies batsman in T20s – and two balls later dismissed Mayank Agarwal after he miscued Harbhajan at long-on. KXIP were reduced to 8 for 2.

Rahul’s first sign of aggression arrived in the fifth over when he took apart Chahar. The opener took 16 off his second over with two fours and a six. With the asking rate under control, Rahul was content rotating the strike and play out spinners safely. He was almost run out in the when MS Dhoni reached the ball in a whisker and flicked the ball back on to the stumps. Rahul was out of the crease when the ball hit the stumps, but the bails hadn’t moved and Rahul survived. Keeping the scoreboard ticking along with Sarfaraz, Rahul reached his half-century off 40 deliveries, his second of the season.

Meanwhile, Sarfaraz continued to bat in his free-flowing brazen manner. With Rahul doing the bulk of the scoring initially, Sarfaraz got his eye in, and once set, went about playing a strokeful knock. He welcomes Kuggeleijn with a thumping six over point. Next over, out came dilscoop and a thumping blow over long-off. He was equally effective against the spin of Ravindra Jadeja and Imran Tahir, cutting the legspinner past point and opening the face of the bat to collect a boundary off the left-arm spinner. He had missed out on a half-century against the Delhi Capitals. He wouldn’t here, getting to his maiden IPL fifty off 42 balls.

CSK had taken 44 off the final three overs, courtesy Dhoni’s late burst. And that is where KXIP probably lost the plot. There would be no such fireworks from KXIP, who managed to score just one boundary in the last eight overs.

Faf du Plessis’ half-century, aided by Dhoni’s late assault lifted CSK to a competitive total. Dhoni arrived at the crease in the 14th over, after KXIP captain R Ashwin had finished a fine spell of 3 for 23. After stuttering initially, the CSK skipper, along with Ambati Rayudu, brought out the big shots in the final three overs.

Playing his first game of the season, du Plessis opened the innings alongside Shane Watson and the pair provided CSK a rollicking start by putting 56 runs. The South Africa captain scored two fours and a six off Mohammed Shami’s second over, and welcomed Andrew Tye with an 18-run over, with both du Plessis and Watson taking the fast bowler for a six each.

Du Plessis’ assault allowed Watson to play himself in. Having scored heavily off the pacers, he drilled Ashwin down the ground for a six and reached his half-century off 33 balls. CSK raced to 54 without loss at the end of Powerplay, their best start of the season. It was from here that KXIP staged an inspiring comeback. The spinners tied CSK down, and with Murugan Ashwin bowling a disciplined spell of none for 23 from his four overs, his captain Ashwin reaped the benefits. Watson not his fluent self, went for a slog sweep and holed out to Sam Curran at deep square leg.

Ashwin the bowled the over of the innings. With Suresh Raina and du Plessis forming a crucial alliance of 44, Ashwin struck twice in two balls to dismiss both set batsmen. A carrom ball had du Plessis miscue a slog sweep and was taken by David Miller at long-on. Next delivery, Raina went for the leg side heave and was castled by the KXIP skipper.

Going 32 deliveries without a boundary, Dhoni provided the crowed reasons to cheer, taking Curran on in the 19th over. Having struck his first boundary off Tye in the previous over, KXIP’s hero from the previous was subjected to a severe beating from the CSK skipper, who took the allrounder for 19 runs off the penultimate over – a six and two boundaries. The final over was no different with Dhoni smoking Shami for a six and a boundary off the first three balls. 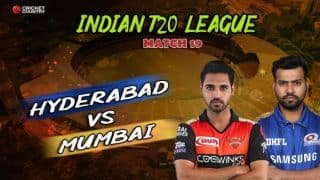 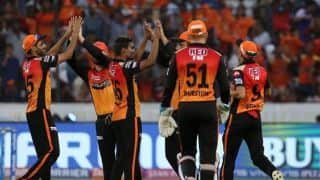