With a thumping 40-run win over the Delhi Capitals, MI have leapfrogged their opponents to be placed second on the points-table.

There is a reason why Mumbai Indians are three-time IPL champions. Their relentless attitude, star power and the will to keep pushing makes them one of the toughest opponents in the Indian Premier League and it is because of such strength in character that Rohit Sharma and his side is peaking in at the right moment in the 2019 season. MI beat Delhi Capitals by 40 runs

With a thumping 40-run win over the Delhi Capitals, MI have leapfrogged their opponents to be placed second on the points-table. The IPL has entered a phased where every result in crucial in deciding the fate of all teams and the Mumbai Indians, out of a wonderful habit, are producing the desired results. After losing to Rajasthan Royals by four wickets last week, MI have notched up back-to-back wins, which takes their tally to 12 points with six wins. Also, MI now have six wins this season, only one behind table-toppers Chennai Super Kings. HIGHLIGHTS: DC vs MI

However, despite being at the top of the pile, CSK are just two points clear of MI. What works well for them is that they possess a healthier run-rate than CSK, which means Mumbai are one win away, and CSK one loss away from the 2017 winners to take the spot. The team which Mumbai replaced the Capitals have slipped a place to take the No. 3 spot.

Also with five wins and 10 points, the Kings XI Punjab take the fifth spot, followed by Sunrisers Hyderabad and Kolkata Knight Riders at fifth and sixth respectively. With just one win, the Royal Challengers Bangalore are still the bottom-dwellers, while with one win more, Rajasthan Royals are one spot removed from the bottom with four points. 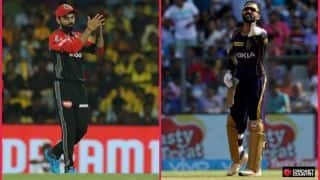