Williamson has flown back home to New Zealand following the death of his grandmother.

Sunrisers Hyderabad will be without their captain Kane Williamson, who has flown back home to New Zealand following the death of his grandmother, when they take on Chennai Super Kings at the Chepauk on Tuesday.

It is likely that Williamson will also miss the next game for Sunrisers, which is against the Rajasthan Royals on April 27 and in his absence, Bhuvneshwar Kumar is expected to return and take over the reins.

Williamson missed Sunrisers opening match of the IPL 2019 and returned for the second game against Kolkata Knight Riders. He then went on to miss the next four games due to an injury before returning to lead captain the side against the Delhi Capitals on April 14.

Williamson, last year s highest-scorer with 735 runs, has scored just 28 runs from four games this season and it is likely that he will be replaced by either Bangladesh allrounder Shakib Al Hasan or Afghanistan s Mohammad Nabi for the clash 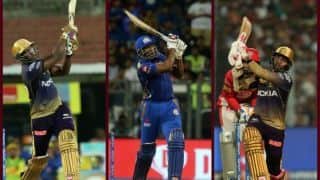