RR have moved up to seventh place, while KKR remain at sixth, but with the same points.

By beating Kolkata Knight Riders by three wickets at Eden Gardens on Thursday, Rajasthan Royals have moved up one spot on the IPL 2019 points table.

Steve Smith’s team now sits at seventh place with eight points, the same as KKR, who remain at sixth, and Royal Challengers Bangalore who have slid back to last.

In match 43 of the IPL, chasing a target of 177 after KKR skipper Dinesh Karthik hit 97* off 50 balls, Rajasthan won with four deliveries left in the game.

This is how the eight teams are placed as of April 26:

In the Orange Cap table for most runs, there are no major movements after the KKR vs RR match.

In the Purple Cap table for most wickets, Rajasthan’s Shreyas Gopal moved up to sixth place. 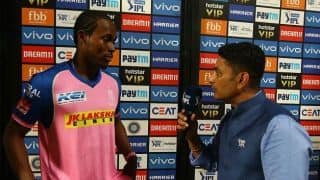 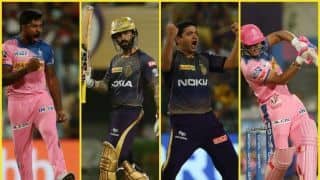