The legspinner Yuzvendra Chahal has stormed past Imran Tahir to claim the Purple Cap for most wickets in IPL 2019, after claiming impressive figures of 2/17 in four overs on Tuesday in game 14.

Chahal was level with Chennai Super Kings’ legspinner Tahir on six wickets, and moved past him to become the owner of the Purple Cap. He dismissed Ajinkya Rahane lbw for 22 and then Jos Buttler caught in the deep for 59. (READ: Four games, four losses: RCB’s worst start ever)

His achievement meant little to Chahal, however, for Royal Challengers Bangalore lost their fourth match in a row to remain at the bottom of the points table.

“It’s a great feeling to have the highest wickets in the tournament, but we didn’t win the match,” said Chahal after RCB’s seven-wicket loss to Rajasthan Royals. “Legspinners have so much variations compared to other bowlers, and we can get a bit more turn even on flat wickets. Created a bit of doubt on the batsman’s mind.

“Our fourth loss in a row, but we have 10 games, and we have a chance of coming back. If we think negative, then no point playing. So we need to be positive.”

Chahal’s hold on the Purple Cap may not last 24 hours, given that Tahir will be in action today when Chennai play Mumbai Indians.

Dwayne Bravo is also in contention with six wickets so far. 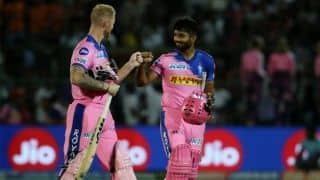 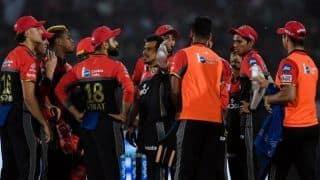