CSK, meanwhile, will now get another chance to make it to the summit clash but will have to beat the winner of the Eliminator in Qualifier 2.

Rahul Chahar, Suryakumar Yadav starred as Mumbai Indians (MI) beat Chennai Super Kings (CSK) by six wickets in the Qualifier 1 of the Indian Premier League (IPL) 2019 at the MA Chidambaram Stadium in Chennai on Tuesday and sealed a place in the final.

CSK, meanwhile, will now get another chance to make it to the summit clash but will have to beat the winner of the Delhi Capitals versus Sunrisers Hyderabad in the Qualifier 2 on Friday in Visakhapatnam.

Needing 132 runs to win, MI innings started with a wobble as Deepak Chahar struck on the second ball as he trapped MI skipper Rohit Sharma before the wickets. Harbhajan Singh then gave CSK their second breakthrough as Quinton de Kock was caught in the deep by Faf du Plessis.

However, Surya and Ishan Kishan steadied the ship for MI. While the two did not go after the bowlers, they kept the scoreboard ticking, with Surya cashing in whenever there were opportunities to go big. (IPL 2019, Qualifier 1 MI vs CSK: AS IT HAPPENED)

While Surya brought up his fifty, Imran Tahir created some panic in MI dug out and gave CSK some hope as he sent Ishan and Kurnal Pandya packing on the consecutive delivery in the 14th over. CSK could have scalped Surya’s wicket too on the first ball of the 15th over but Shane Watson dropped a sharp catch in the slip, off Ravindra Jadeja.

MI though made sure that there was no late collapse as Surya remained unbeaten on 71 as he and Hardik helped the team to cross the finish line with nine balls to spare.

While Murali Vijay was brought into the team, replacing the injured Kedar Jadhav, the Tamil Nadu batsman, who otherwise opens the innings, did not open the innings this time around as CSK chose to stick with Shane Watson and Faf, who scored 96 in CSK s final league stage match against Kings XI Punjab.

Lasith Malinga opened the bowling for MI and conceded just one run in the first over as Faf opened his and team s account on the final delivery of the over. MI, in the second over, had their first chance, a really difficult one though, to scalp their first wicket as leaping Jasprit Bumrah did his best to pull off a stunner to dismiss Faf off Krunal.

However, MI though did not have to wait for too long as Rahul Chahar struck on the first ball of the third over to send the South African packing.

Then, Jayant Yadav, who replaced Mitchell McClenaghan in the playing XI, gave MI a big breakthrough, removing Suresh Raina in the fourth over. The left-hander, who has an impressive record in the IPL playoffs, perished for five as MI dismissed two batsmen, who had registered fifty-plus scores in the last game, in the powerplay.

While CSK scored 19 runs in the last two overs of the powerplay, Krunal struck on the final ball of the powerplay as Yadav took a fine catch, running backwards, to get Watson out for 10 and reduced CSK to 32/3.

Vijay and Ambati Rayudu then added 31 runs together. However, Chahar struck for the second time in the match as Vijay got stumped for 26 in the 13th over.

Dhoni then joined Rayudu in the middle and despite some nervous moments during the running between the wickets in the 14th over, provided some much needed pace to CSK innings, hitting Jayant Yadav for two sixes. However, MI did not let CSK to cut loose till the 18th over. 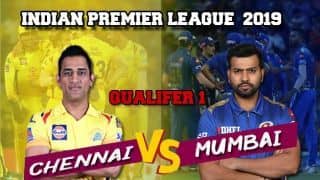