Umesh Yadav went for 24 runs in the final over but RCB managed to seal a win on the final ball of the match.

MS Dhoni almost pulled off an absolute heist as Umesh Yadav went for 24 runs in the final over but Parthiv Patel s direct-hit to run-out Shardul Thakur helped Royal Challengers Bangalore (RCB) edge out Chennai Super Kings (CSK) in a last-ball thriller in the 39th match of the Indian Premier League (IPL) 2019 at the M Chinnaswamy Stadium in Bengaluru on Sunday.

Captain Cool registered his highest T20 score and remained unbeaten on 84 (off 48 balls), hitting 5 fours and 7 sixes, as CSK, despite losing first four wickets for 28 runs, almost handed RCB their eight defeat of the season while chasing the 162-run target.

Dale Steyn pushed CSK on the backfoot in the first over of the chase as he dismissed Shane Watson and Suresh Raina. Umesh then added to CSK s trouble as he got out Faf du Plessis and Kedar Jadhav.

Ambati Rayudu and Dhoni then did the rebuilding job as the two put up a 55-run stand before Yuzvendra Chahal dismissed the former for 29. While Ravindra Jadeja and Dwayne Bravo could only score 11 and 4 respectively, Dhoni kept CSK in the hunt with timely big hits. (AS IT HAPPENED)

While scoring 36 runs off the last two overs was always going to be a difficult task, Dhoni almost helped CSK cross the finish line.

Earlier, batting first, Parthiv scored a fifty but Virat Kohli and AB de Villiers as RCB were restricted to 161/7.

Deepak Chahar gave CSK their big breakthrough as he dismissed Kohli in the third over. The RCB skipper, who had scored a hundred in the previous game, could only score nine this time around. While De Villiers dazzled and put up a 47-run stand for the second with Parthiv, the former South African skipper could only score 25 before Ravindra Jadeja dismissed him in the seventh over.

Akshdeep Nath was the next man to get out as Jadeja scalped his second wicket of the evening. Parthiv, meanwhile, continued to keep the scoreboard ticking from the other end and brought up his fifty. However, the wicketkeeper-batsman got out soon after and Marcus Stoinis perished immediately after Faf-Dhruv Shorey s brilliant tag-team work near the rope provided CSK with another wicket.

Moeen Ali had set the stage on fire with his 28-ball 66-run knock in the previous match. While he did not get that much time in the middle, the left-hander still made the most of his stay and scored 26 off 16 balls to push RCB past 160 after put in to bat. 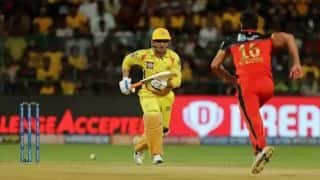