Rain had the final say in the RCB vs RR IPL contest which was eventually called after a delayed start.

After rain relented and finally allowed for a curtailed contest, the IPL 2019 match between Royal Challengers Bangalore and Rajasthan Royals was shaping up for a close finish. But rain had the final say as the match was eventually called off midway through RR’s chase.

Here are the highlights from the abandoned contest:

After a lengthy rain-delay, the five-over shootout began. RCB captain Virat Kohli was firing on all cylinders from the word go as he walked out to open the innings alongside AB de Villiers. The first ball of the night from Varun Aaron was dispatched over long-off for a six followed by a not-so-convincing shot resulting in an outside edge that still sailed over third man boundary. He meted out a similar punishment to Shreyas Gopal whose first delivery was thrashed over long-on followed by a thumping boundary through mid-off. A couple off the next took Kohli to 25 off six as RCB made a blazing start.

RR legspinner Gopal claimed the second hat-trick of the ongoing season. In a rain-curtailed tie, Gopal stood out with a hat-trick that included the scalps of modern-day greats Kohli and De Villiers. He started his spell conceding a six, four and a couple off the first three deliveries faced by Kohli. Then a mistimed shot found the fielder as Kohli holed out. Next ball, De Villiers sliced to extra cover where Riyan Parag accepted a dolly. Allrounder Marcus Stoinis faced the hat-trick delivery which he launched to mid-on to be caught. This was the 25-year-old’s second hat-trick of the year after claiming one in Syed Mushtaq Ali T20 Trophy.

Chasing 63, RR were given a perfect start by their opening duo of Sanju Samson and Liam Livingstone. After a missed attempt at dealing with a short delivery first-up, Samson sent the second sailing over deep mid-wicket boundary for a six and then flicking the next for a four. Livingstone got off the mark with a four before a pull brought him his first maximum. The first two overs went for 24 runs. Samson then waded through Kulwant Khejroliya creaming him for 17 runs including two sixes and a four. In three overs, RR had scored 40 needing 23 from the final two. Samson was out after smashing 28 off 13.

Just when it seemed the contest after a lengthy rain-delay was shaping up for a close end, rain returned. And this time closed out the match for good with RR finishing on 41/1 in 3.2 overs. The match wad abandoned thus closing the doors on RCB’s playoff hopes. Both teams were awarded a point each with RCB now on 9 points with a match to play and RR also have one match to play with 11 points but their hopes of entering the playoffs are still alive. 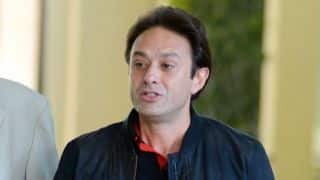 Kings XI Punjab could be suspended after co-owner's arrest 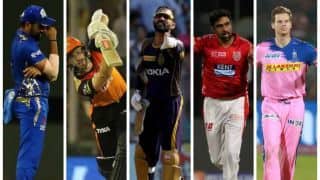