IPL 2019, RCB vs SRH: If we focus on the second half, it is exactly what we wanted in the first half: Virat Kohli

IPL 2019, RCB vs SRH: If we focus on the second half, it is exactly what we wanted in the first half: Vira

RCB ended their IPL 2019 campaign on a high, beating SRH by four wickets.

While Royal Challengers Bangalore (RCB) ended their Indian Premier League (IPL) 2019 campaign with a win over Sunrisers Hyderabad (SRH) at the M Chinnaswamy Stadium in the 54th match of the season in Bengaluru on Saturday, the RCB skipper said that his team has a lot to learn from the twelfth edition of the tournament.

The Bengaluru-based franchise lost six matches in a row before going on to win five out of last seven games and failed to make it to the playoffs. Kohli said that the results in the second half of the season was something that the team was looking for in the first half.

If we focus on the second half, it is exactly what we wanted in the first half. After losing your first six matches, it is very difficult to come back in a tournament like IPL. We have a lot to learn from this season. The first couple of things matters a lot in setting the intensity. We are happy with the way guys have turned things around and the kind of cricket that we have played in the second half, said Kohli.

A lot of credit goes to the team management for getting us back in the right frame of mind. We haven’t finished in the position that we wanted to. But because the second half has been so good it doesn’t feel like a bad season. We won last 5 off our 7 matches and with one no-result, it is something that we can be proud of. It is such a short format that often 5 or 7 minutes decide the outcome. We can be proud of the boys effort in the final few matches, he added.

RCB were reduced to 20/3 in the chase of 176 against SRH on Saturday. However, Shimron Hetmyer and Gurkeerat Singh Mann put on a 144-run partnership and powered RCB to four-wicket win against the Kane Williamson-led SRH.

Kohli lauded the Indo-West Indian duo for their effort, saying, When me and ABD got out, I think the opposition took it lightly. We spoke upstairs that time for someone else to show up. Both Hetmyer and Gurkeerat played really well. We know Hetmyer can play like that. We would like Hetty (Hetmyer) to play like he did today next year. And Gurkeerat played a really mature innings. He has a keen eye for the game.

Kohli also thanked the RCB fans for the way they supported their team even as the results did not really go in the favour of Kohli and Co.

I just want to tell all the people in the stadium that it has been such a long time playing in this stadium and every year we come, the support is better. Hats-off to you guys for turning up in numbers. We are so thankful and so grateful to have fans like you all. I can certainly feel your pain. I am emotionally attached to this team like all of you. And next year we will definitely improve our performance. And give you guys what you deserve in return. Thanks again for coming out in huge numbers. You are the best fans in the IPL, concluded Kohli. 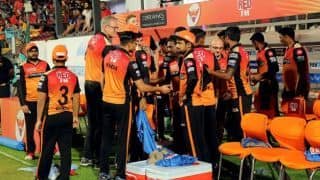