Following their four-wicket defeat against RCB, SRH hopes to make it to the playoffs depend on the result of the Mumbai Indians (MI) versus Kolkata Knight Riders (KKR) match in Mumbai on Sunday.

While Kane Williamson returned to form with an unbeaten 70, Sunrisers Hyderabad (SRH) lost against Royal Challengers Bangalore (RCB) in the 54th match of the Indian Premier League (IPL) 2019 at the M Chinnaswamy Stadium in Bengaluru on Saturday.

Although were reduced to 20/3 in the 176-run chase, Shimron Hetmyer and Gurkeerat Singh Mann’s 144-run partnership helped Virat Kohli and Co end their IPL 2019 campaign on a high.

Williamson lauded RCB and admitted that 10-15 runs would have made the difference for SRH.

“Every time you turn up you like an element of control. At the halfway stage it felt like we set a competitive total. Credit to Bangalore for the way they stuck out and kept coming hard at us,” said Williamson.

“Naturally when you take your opportunities it does help. But that is a game of cricket. It would’ve been nice to get 10-15 runs in the first innings, but credit to Bangalore for keeping up the pressure. I suppose there are a number of fine lines, our last two matches could’ve gone either way but we ended up on the wrong side. But that’s T20 cricket for you,” added the SRH skipper.

Following their four-wicket defeat against RCB, SRH hopes to make it to the playoffs depend on the result of the Mumbai Indians (MI) versus Kolkata Knight Riders (KKR) match in Mumbai on Sunday.

If KKR win, SRH will be knocked out from the race to the playoffs. However, if KKR lose, SRH, despite having as many points as KKR, will make it to the playoffs on the basis of a better net run-rate.

Williamson said not having the things in their control is a bit of shame.

“It is one of those things now, we have to sit and wait, things are not in control which is a shame. Fingers crossed, lets see how it goes tomorrow,” concluded the SRH skipper. 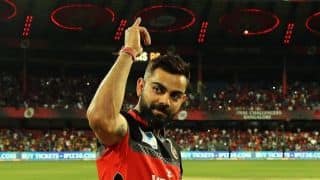 IPL 2019, RCB vs SRH: If we focus on the second half, it is exactly what we wanted in the first half: Virat Kohli