Check the points table of IPL 2019 full at Cricket Country updated after RCB vs KXIP match, which RCB won by 17 wickets to register their third straight win.

With their third straight win in IPL 2019, Royal Challengers Bangalore finally came out of the eighth position in the IPL points table moving up to seventh. They beat Kings XI Punjab by 17 runs to claim their fourth win of the tournament and with that they keep their slim chance of qualification for the playoffs alive.

For KXIP, it was their fifth loss away from home and overall sixth loss in 11 games and keeping them in fifth position with 10 points but with an Net run-rate in the negative. In fourth are Mumbai Indians, also with ten points with one game less than KXIP and with with a far super net run-rate as well.

Ab de Villiers was the start of the night for RCB with the bat as he hammered 82 off just 44 balls helping his team to 202/4. He was ably supported by Marcus Stoinis, who made an unbeaten 46 while Parthiv Patel made an enterprising 43 off 27 balls up the order. SCORECARD: RCB vs KXIP

KXIP too had a good start with the bat with KL Rahul and Mayank Agarwal driving the chase after they lost Chris Gayle in the powerplay overs for 23 off 10 balls. But the wickets of the both well set batsman – Agarwal for 35 and Rahul for 42 – in a span of four runs dented KXIP. David Miller’s slow innings – 24 off 25 balls – did not help KXIP’s cause even as West Indian Nicolas Pooran’s 28-ball 46 kept his team in the hunt. HIGHLIGHTS: RCB vs KXIP

In the end, some terrific death bowling from Umesh Yadav and Navdeep Saini helped KXIP restrict to 185/7. 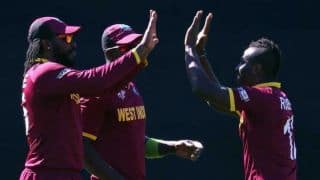 Russell assured us that he will be fine: West Indies chief selector Robert Haynes 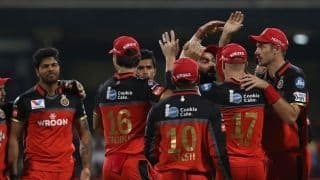