Chris Lynn was batting in the fourth over off Dhawal Kulkarni when the ball hit the stumps but the bails were not dislodged.

Rajasthan Royals (RR) were left high and dry after the ball hit the stumps but the bails were not disturbed during their Indian Premier League (IPL) 2019 tie against Kolkata Knight Riders (KKR) in Jaipur.

In a lopsided contest on Sunday, the Royals lost to KKR by eight wickets with 37 balls to spare. Asked to bat first, Royals could only muster 139/3 in 20 overs. KKR cantered to victory, losing just two wickets.

But things could have been different had the ball dislodged the bails when Chris Lynn was batting in the fourth over off Dhawal Kulkarni.

Lynn, who went on to make a 32-ball 50, was batting on 13 when a length ball came into the Australian who was cramped for room. (ALSO READ: RR vs KKR, Talking Points: Contrasting debuts and lucky breaks)

It got an inside edge that hit the leg stump, the stump lights turned on but the bails were not dislodged as the ball raced towards the fine leg boundary.

This got Twitter into a frenzy as many posted jokes and memes in a light-hearted manner. (ALSO READ: A clinical effort but need to improve in a few situations: Dinesh Karthik)

The Royals were about to celebrate but their joy was cut short, with social media enthusiasts having a good time out of it.

KKR raced to 140/2 in 13.5 overs and are now top of the table with eight points from five matches. The Royals, meanwhile, are languishing in seventh place with just two points from five games. 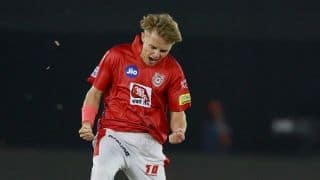