All the highlights from the Sawai Mansingh Stadium in Jaipur where Steve Smith celebrated his fine return to captaincy with an unbeaten fifty which helped RR defeat MI by five wickets.

A few hours after he was named the new skipper of Rajasthan Royals, Steve Smithcelebrated his return to captaincy in style, striking a half-century and shepherding his team to a five-wicket win over Mumbai Indians on Saturday. With the win, Royals completed a double over the three-time winners following their four-wicket win at the Wankhede last Saturday. 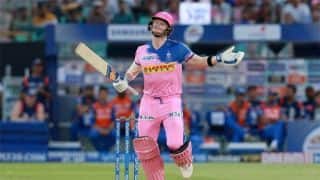