The Royals are without premier batsman Jos Buttler, who has flown back to England to be with his wife for the birth of his child.

Three years after he last led Rajasthan Royals, Steve Smith took over captaincy of the team as announced by the franchise on Saturday. Smith celebrated his return to captaincy by winning the toss for RR and opting to bowl against Mumbai Indians at the Sawai Man Singh stadium.

The Royals are without premier batsman Jos Buttler, who has flown back to England to be with his wife for the birth of their child. Ben Stokes returns having missed the previous two games and so does Riyan Parag in place of legspinner Ish Sodhi and batsman Rahul Tripathi.

“We’ll bowl first as I’m not sure of the wicket, what it’s going to do. Chasing would be a good option,” Smith said during the toss. “Ajinkya has done a terrific job in the last one and a half year. I have done a bit of leadership in the IPL, hopefully I can lead the team well. Plenty of games coming up. We got three changes, I come in for Buttler who’s gone back for the birth of his child, Stokes is back in the team and Riyag Parag comes in.”

Admitting he would have wanted to bat first, MI skipper informed about the lone change in their Playing XI from the previous game.

“They’ve a lot of right handers, hence Mayank Markande comes in for Jayant Yadav,” Rohit said. “There’s no grass on this side, bit of grass covering on the other side, looks a bit strange. I was going to bat first as well, because we have defended well as a team. It doesn’t matter if we win games or lose games, there’s always room for improvement. There have been different individuals who have stepped up and that’s been a good thing. We’ve got one change, we are playing to the conditions.” 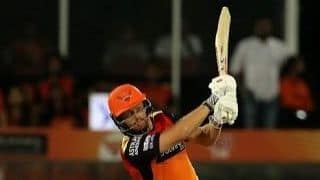