IPL 2019, SRH vs KKR: Kuldeep Yadav couldn't stand up for us in the last game, dropped from playing XI due

The wrist spinner has only got four wickets in nine IPL games at an economy rate of 8.66.

He is expected to play a vital role in India’s World Cup campaign in England but chinaman Kuldeep Yadav’s slump prompted Kolkata Knight Riders (KKR) team management to drop him from the playing XI against Sunrisers Hyderabad barely six weeks before the big event.

The wrist spinner has only got four wickets in nine IPL games at an economy rate of 8.66 and KKR dropped him in their 10th game even though his replacement, KC Cariappa, fared worse, giving away 34 runs in two overs.

When asked about Kuldeep’s absence from the playing XI, KKR skipper Dinesh Karthik made it clear that he was dropped owing to poor form.

“A form issue with (Kuldeep) – as he couldn’t stand up for us in the last game. We had to give him a break and get him back fresh.”

However, despite his poor form, KKR’s other spinners went for plenty and gave away a cumulative 106 runs in nine overs.

“Our bowling has been off colour in the tournament. Our fielding needs a lot of improvement too,” said skipper Karthik, who is also under scanner due to his poor form and a controversial berth in the World Cup bound squad.

“I think 160 was a par score on this wicket if we’d bowled well. I think they (Warner and Bairstow) batted really well but our fielding cost us. And after that dropped catch (off Prithviraj), he (Bairstow) came at us all guns blazing. A wicket of Bairstow would have felt better, feel for the guy (Yarra Prithviraj). We have been outplayed in this game,” Karthik said. 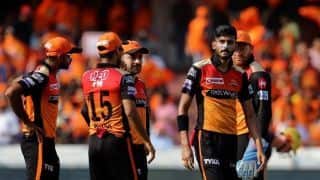 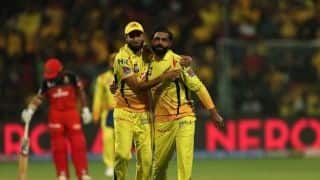