Sundaram Ravi and Ulhas Gandhe's bloopers have raised questions on the standard of umpiring in the IPL.

Sundaram Ravi and Ulhas Gandhe‘s bloopers have raised questions on the standard of umpiring in the IPL 2019 but it is Mahendra Singh Dhoni‘s public outburst that has triggered a debate on whether star players get away with intimidating match officials.

For the first time in his illustrious career, Dhoni, a two-time World Cup winning former India captain, entered the field of play for an angry confrontation with umpire Gandhe, who backtracked after signalling a no ball during an IPL match on Thursday night.

“Obviously star players try to pressurise umpires but it’s up to the umpires to withstand the pressure. They will do what they feel but it depends on the personality of the umpire,” one of India’s most well-known international umpires, K Hariharan said on Friday.

As per laws, Dhoni had no right to enter the field of play and has got away with a fine of 50 percent of his match fees, something that will be paid by his franchise Chennai Super Kings.

The maximum punishment for this Level 2 offence could have been a two-match ban but even that was liable for appeal.

Dhoni’s confrontation is the second incident in the first three weeks of the tournament in which a superstar cricketer has blasted the umpire.

Earlier, it was Virat Kohli, who was livid with ICC Elite Panel Umpire Ravi for failing to spot a no ball bowled by Lasith Malinga which proved costly for his team in the end.

“We are not playing club cricket. Umpires need to be smarter,” Kohli had lashed out.

Even his rival IPL captain and India deputy Rohit Sharma (Mumbai Indians) was critical of the quality of umpiring on that day.

However, Kohli was not even reprimanded even though the ICC Code of Conduct clearly states that players cannot publicly criticise umpiring decisions.

In Indian cricket, especially the domestic umpires, have always been edgy when put under the pump by star players.

“For any umpire, it is necessary to have courage to stick to his decision,” said Hariharan, who has stood in two Tests and 34 ODIs apart from officiating in first three seasons of IPL.

Hariharan then came to the game specifics of the CSK versus Rajasthan Royals clash in which Dhoni had the unprecedented meltdown.

“Let’s get this straight. As per ICC playing conditions, it was square leg umpire Bruce Oxenford’s prerogative to check waist high full toss. Umpire Gandhe had no business signalling no ball. He got it wrong.

“Now coming to commentators and experts. No umpire can go upstairs to check for validity of a no ball if the batsman is not out. So, umpires couldn’t have referred it to TV umpire,” said Hariharan.

“Lastly, Mahendra Singh Dhoni had no business entering the ground as that is completely prohibited. For starters, the 50 percent fine is a very light sanction,” said Hariharan.

He feels that not all umpires are bullied by players and ones consistent with their decisions get respect.

“A good umpire is one who gets his decisions correct but a great umpire is someone blessed with ‘Match Management’ skills. It’s different from giving decisions. It’s about controlling the match.”

But umpires are human and some decisions can have deep impact as he related one of the most famous bloopers of the pre-Internet social media era back in 1997.

It was Hariharan’s international debut in an ODI match between India and Sri Lanka at Margao, Goa.

Ajay Jadeja got the thickest of edges off a Sajeewa De Silva delivery caught by keeper Romesh Kaluwithrana.

The Lankan players started celebrating and then it happened.

The famous visual of Umpire RP Sharma raising his finger only to start scratching his hat as Arjuna Ranatunga looked bewildered.

Jadeja was unmoved and he got a scratchy 50 after which Ranatunga mockingly shook his hands.

“I can’t forget that match and Professor Sharma’s 15th match. He never officiated in any game after that. I wonder what would have happened in today’s time when people still remembered a match aired on DD,” Hariharan said.

“My family was there for my debut and in the evening I found him sobbing in his room. He was shattered and depressed. We wanted to take him out for dinner but he was in no position. He was never the same man after that,” he recalled.

The BCCI mandarins admit that the standard of umpiring has gone down in recent years and lack of quality umpires is an issue.

Recently, the BCCI admitted that only 17 umpires are officiating in the IPL.

Out of them, 11 are Indian and six foreigners from the Elite Panel. Apart from them, there are six more Indians as fourth umpires.

“In a tournament which is as hectic as IPL, even umpires can have fatigue due to constant travelling and officiating in every second game,” a BCCI official stated, trying to put things in perspective. 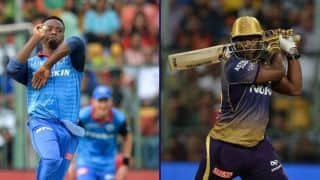