After a poor campaign so far, Rajasthan Royals have sacked Ajinkya Rahane as their captain and handed over the reins to Steve Smith.

Their IPL 2019 campaign hanging by a thread, Rajasthan Royals have sacked Ajinkya Rahane as the captain. Steve Smith will lead the inaugural champions for the remainder of the season.

Under Rahane, RR have managed to win just two of their eight matches so far and are languishing at the seventh spot in the points table. Their victories have come against fellow bottom-dwellers Royal Challengers Bangalore and Mumbai Indians.

In a statement an hour before their return fixture against MI at Jaipur on Saturday, RR made the announcement saying the franchise is looking to approach the tournament with a fresh perspective.

“Steve has always been part of the leadership team within RR and Rahane will continue to be a key voice in the side, therefore the Royals see this as a small restructuring process to secure the results required to move up the table,” the statement read.

Under Rahane, who was named captain last season after Smith skipped the 2018 edition following his involvement in ball-tampering scandal, RR made the playoffs but have failed to replicate that performance so far.

“Ajinkya is and will always be a true Royal. He led the team to the play offs in 2018 in a very challenging scenario and that will go down as one of the great comebacks of the IPL. He remains a key part of our side and leadership team and will extend support wherever required to Steve,” Zubin Bharucha, Head of Cricket for Rajasthan Royals, said.

He added, “Steve is one of the most innovative and successful captains in the world, in all formats of the game. We are confident he can lead the Royals to success.” 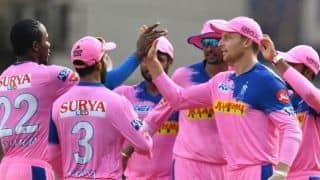 Rajasthan Royals vs Mumbai Indians, IPL 2019, LIVE streaming: Teams, time in IST and where to watch on TV and online in India