Smith, not thinking about the world, thrived under pressure and won three of the five matches in the later stage of the tournament to keep Rajasthan’s chances alive of making it to the playoffs.

One can never forget the scene when Steve Smith cried at a press conference held in Australia after taking full responsibility of the ball-tampering incident which took place in the Cape Town Test against South Africa last year.

Skipper Smith and deputy David Warner were banned for a year each by Cricket Australia while Cameron Bancroft was banned for nine months.

As a result of the ban, Smith was also barred by the BCCI to take part in the 2018 edition of the Indian Premier League (IPL 2019).

Without the tainted duo, especially their skipper Smith, the performance of the Australian team also deteriorated. It was in their absence only that Australia, for the first time, had to face a Test-series defeat against India in their own backyard. (ALSO READ: The candidates to replace outgoing Australian, England and South African cricketers)

However, just before the start of the ICC World Cup 2019, things seem to be falling in place for the Aussies. They defeated Virat Kohli and boys in the five-match ODI series in India. And now, both Smith and Warner have found form as they gear up to represent the country in the 2019 World Cup in England and Wales.

While Sunrisers Hyderabad batsman Warner had a dream return to the IPL, Smith’s journey this season can be easily termed as a mixed bag.

The 29-year-old started the tournament poorly and even saw himself sitting in the dugout for a match. However, with Rajasthan Royals failing to deliver under Ajinkya Rahane’s leadership, the captaincy was handed to Smith – a development which raised many eyebrows.

"These last few weeks have been fun and make sure you guys finish strong in Delhi!"

Thank you, skipper! All the best for the @icc #CWC19! 🙌🏾 #HallaBol pic.twitter.com/m1rjBaAvF1

Smith, not thinking about the world, thrived under pressure and won three of the five matches in the later stage of the tournament to keep Rajasthan’s chances alive of making it to the playoffs.

He scored 319 runs from 12 matches at an average of 39.87 before leaving for Australia for the World Cup preparations. He scored four fifties and played some crucial knocks for Rajasthan till Sunday.

Though, one can argue that Smith’s performance has not been as flamboyant as Warner’s this season, but the ease and the class with which he batted throughout the tournament was something which will tell his critics that he is the same Smith who single-handedly won Australia matches a year ago.

His presence in the Australian camp in the World Cup will also surely lift the morale of the team who would be looking to successfully defend the title of World Champions in the 50-over format. 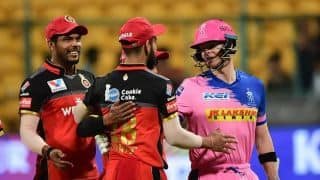 A common sense rule should be implemented at times: Call for ‘adaptable’ laws as rain dumps Kohli out of IPL