Pravin Tambe became the oldest player to be bought in the history of the IPL when KKR picked him up for Rs 20 lakh at the players' auction Thursday.

“Age is just a number, not a state of mind” – this Cecelia Ahern quote was once again proved correct on Thursday when 48-year-old Pravin Tambe became the oldest player to be bought in the history of IPL players’ auction. Tambe was snapped up by two-time champions Kolkata Knight Riders (KKR) for his base price of Rs 20 lakh.

Promises to bring all his experience and energy for his new franchise (KKR) in the upcoming edition of IPL, the Mumbai leg-spinner says he doesn’t feel a day older than 20.

On a day when youngsters went unsold at the IPL auctions, the former Rajasthan Royals spinner, who was the oldest player in the list, was bought by Shah Rukh Khan co-owned franchise. “I still play with a mindset like I am a 20-year-old young,” Tambe, who has an 18-year-old son, was from Mumbai.

“I will bring all my experience and energy to the team. And that positivity. I know that I can bring that, even if I’m with them not playing.”

Your passion and love for the sport is quite inspirational, Pravin Tambe 🙌

Kolkata is all pumped-up to have you in the 23-Knight 💪 squad 💜#KKR #IPL2020 #KorboLorboJeetbo #IPLAuction2020 pic.twitter.com/r5zkuDcteY

He doesn’t feel that age will be an impediment. “People say many things but I keep doing my job and put in a lot of hard work. I will like to do well in whatever role given to me be it in fielding or bowling. It’s not to prove anything. If that was the case, I could not have played so long. I’m really excited to play for them,” Tambe, who works as a sports teacher at DY Patil, said.

“My family has supported me all these years. They keep inspiring me. KKR must have seen something in me to have bought me. I’m grateful to KKR team management. I want to give them back. If you get the support, you can go a long way,” Tambe said.

While Tambe’s passion for cricket still drives him crazy, his son has chosen academics and is now studying to become an engineer. “My son never wanted to be a cricketer. He has chosen engineering as his profession.”

It was Tambe, who clinched a hat-trick (3/26) against Kolkata Knight Riders to spin Rajasthan to victory by 10 runs in IPL 2014 in Ahmedabad.

“I distinctly remember the moment. I’m really proud to be playing for the same team now. It was a match-winning show and my dream now would be to give a similar match-winning performance for KKR,” he said.

Tambe will look to fill in the void left by Piyush Chawla who was released by KKR and was bought by Chennai Super Kings at the auction.

“I knew I would fit in as a back-up player. They did not have many spinners left in the slot. I’m just focusing about performing well. I don’t want to bother what people are talking about,” said Tambe, knowing fully well that questions will be raised about the logic behind buying a 48-year-old instead of a rookie who has future in this game,” Tambe signed off. 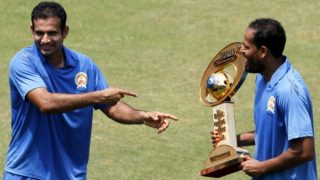