The BCCI has received the central government's formal approval to conduct this year's Indian Premier League in the UAE, league chairman Brijesh Patel revealed on Monday.

Good news for cricket fans around the world as IPL Chairman Brijesh Patel makes a big announcement that the Board of Control for Cricket in India (BCCI) has got all the clearances that were needed to stage Indian Premier League (IPL) 2020 in UAE. On Monday, Patel revealed that BCCI received written permission from the government to conduct the 13th edition of the lucrative T20 tournament.

The IPL will be held in the UAE from September 19 to November 10 in three cities — Sharjah, Abu Dhabi, and Dubai. The government had last week given an ‘in principle’ go-ahead to the BCCI to shift the marquee league to the UAE due to rising cases of COVID-19 in the country.

“Yes, we have received all the written approvals,” Patel told PTI when asked whether the permission has come in writing from both the Ministry of Home Affairs (MHA) and Ministry of External Affairs (MEA).

When an Indian sports body shifts a domestic tournament abroad, it requires clearance from Home, External and sports ministries respectively.

“Once we had the verbal okay from the government, we had intimated the Emirates Cricket Board. Now we have the papers also, so franchises can be intimated that everything is in order,” a veteran BCCI official told PTI on conditions of anonymity.

Most of the franchises will be flying out after August 20 after two mandatory RT-PCR (COVID-19 tests) conducted within 24 hours from their departure base.

The Chennai Super Kings players and staff, who are leaving on August 22, will have a small camp at the Chepauk on the insistence of skipper Mahendra Singh Dhoni.

The BCCI is also facing problems on the sponsorship front after calling off the title deal with Chinese mobile phone company Vivo for the current year due to massive public outrage over the Sino-India border stand-off.

It was a Rs 440 crore deal and as BCCI looks at potential sponsors, Baba Ramdev’s Patanjali has shown interest in becoming the new title sponsor. 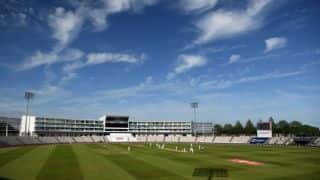