IPL 2020 Points Table Today Latest After CSK vs KKR Match 49: Mumbai Indians on Thursday became the first team to qualify for the IPL 2020 playoffs after Chennai Super Kings pulled off a six-wicket win over Kolkata Knight Riders in Dubai in match no. 49. While Chennai were already out of the tournament, the loss made Kolkata’s task a lot tougher. KKR, who are on the fifth position despite the loss, are on 12 points and can get to only 14 if they win their final league game in IPL 2020. Defending champions Mumbai Indians, who are on 16 points, are also on course to securing a top-two finish, which will give them two shots at reaching the final. Knight Riders’ loss could also make the qualifying task easier for RCB and Delhi Capitals, who are on 14 points with two games to play.

Ruturaj Gaikwad’s scintillating 53-ball 72 and by Ravindra Jadeja’s unbeaten 31 off 11 handed Chennai Super Kings a six-wicket win over Kolkata Knight Riders in a nail-biting finish on Thursday. The win helped CSK take their points tally to 10, but the Mahendra Singh Dhoni-led side remains at the bottom of the eight-team competition. Chasing the 173-run target, CSK, who suffered a mini middle-order collapse, were 143/4 wickets at the end of the 18th over. However, Jadeja’s heroics ensured his side a morale-boosting win.

Ambati Rayudu – 38 and Ruturaj steadied the ship with a 68-run partnership, helping CSK cross the first three-digit mark in 12 overs. Pat Cummins – 2/31 finally came with some relief for his side as the Aussie quick sent back a good looking Rayudu in the 14th over.

Chakravarthy further jolted CSK when he castled their captain Dhoni in the next over before Cummins’s sent back a well-settled Ruturaj to help KKR make a comeback in the contest. Ruturaj’s knock contained six boundaries and couple of sixes. KKRs joy, however, didn’t last long as Jadeja and Sam Curran – 13 not out amassed 20 runs of the second last over, thanks to the former who scored bulk of the runs. With 10 needed of the final over, the duo managed only three runs in the first four deliveries, putting another twist in the tale. However, Jadeja ensured the night remains with CSK as he smacked Kamlesh Nagarkoti for two consecutive sixes off the final two balls to finish things off in style. Jadeja’s unbeaten 31 was laced with two fours and three massive hits into the stands. For KKR, Chakravarthy and Cummins bagged two wickets each.

Kings XI Punjab captain KL Rahul continues his domination at the pole position in IPL 2020 Orange Cap tally, with 595 runs under his belt in 12 matches. Rahul is followed by Delhi Capitals veteran batsman Shikhar Dhawan, who is at the second slot with 471 in 12 matches. Sunrisers Hyderabad skipper David Warner is at the third spot with 436 runs in 12 matches. RCB captain Virat Kohli and his teammate Devdutt Padikkal occupy the fourth and fifth spots respectively. Kohli, who had a rare failure on Wednesday versus Mumbai had 424 runs in 12 matches, while Padikkal has 417 runs in same numbers of matches.

Delhi Capitals ace pacer Kagiso Rabada still rules the roost in Purple Cap charts with 23 wickets in 12 matches. Mumbai Indians’ bowling spearhead Jasprit Bumrah is at the second position in the IPL 2020 Purple Cap list – most wickets in the tournament, with 20 scalps in 12 matches. Bumrah’s figures of 3/14 against Royal Challengers Bangalore on Wednesday helped MI to restrict them onto an average total in Abu Dhabi. Kings XI Punjab’s gun-paceman Mohammed Shami is at the third slot with 20 wickets in 12 games. Meanwhile, RCB’s main strike bowler Yuzvendra Chahal and Sunrisers’ ace spinner – Rashid Khan occupy the fourth and fifth spots with 18 and 17 wickets respectively. 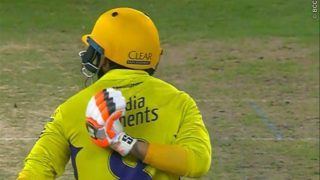