IPL 2020 Points Table Today Latest After RCB vs SRH Match 52: Pacer Sandeep Sharma and all-rounder Jason Holder pulled a stumbling SunRisers Hyderabad over the line against Royal Challengers Bangalore in the Indian Premier League match 52 in Sharjah and took them a step closer to the playoffs spot with the five-wicket verdict on Saturday. With this win, Hyderabad jumped from seventh place to fourth on the points table. Now, as many as four teams — SRH net run rate +0.555, Kings XI Punjab -0.133, Rajasthan Royals -0.377, and Kolkata Knight Riders -0.467 — are locked at 12 points each. All the teams have one match left to play in the league stages, and their final positions could be determined by the net run rate.

Defending champions Mumbai Indians are at the top of the table with 18 points while Royal Challengers Bangalore and Delhi Capitals are placed second and third respectively with 14 points each. The top four teams qualify for the IPL 2020 playoffs. Chasing RCB’s 120 for seven wickets in 20 overs, Holder played a top cameo of 26 off 10 balls to take Sunrisers to a five-wicket win with just under six overs to spare at the Sharjah Cricket Stadium. SRH finished at 121 for five wickets in 14.1 overs. In the crucial contest on Saturday, Hyderabad captain David Warner won the toss and opted to field. His decision prove to be a masterstroke as his bowlers produced an impressive bowling effort to restrict a star-studded Bangalore side to a moderate total. In return, SRH suffered few hiccups but somehow managed to find their way o victory.

Kings XI Punjab captain KL Rahul continues his domination at the pole position in IPL 2020 Orange Cap tally – most runs in the tournament – with 641 runs under his belt in 13 matches. Rahul is followed by Delhi Capitals veteran batsman Shikhar Dhawan, who is at the second slot with 471 in 13 matches. Sunrisers Hyderabad skipper David Warner is at the third spot with 444 runs in 13 matches. While, RCB captain Virat Kohli and his teammate Devdutt Padikkal occupy the fourth and fifth spots respectively – 431 and 422 runs.

Kohli had a rare failure on Saturday versus Hyderabad, as he was dismissed by pacer Sandeep Sharma for the seventh time in IPL history. The in-form RCB opener Padikkal also perished cheaply for 5, Sandeep took his wicket as well.

Mumbai Indians’ gun pacer Jasprit Bumrah took three wickets for 17 runs in his four overs against Delhi Capitals on Saturday to take his wickets tally to 23 and take the Purple Cap from speedster Kagiso Rabada of Delhi Capitals. Though Rabada has the same number of wickets, Bumrah has a better average – 15.73 – and economy rate – 6.96 – than the South African, whose corresponding average and economy are 18.04 and 8.19 respectively. Bumrah removed Marcus Stoinis and Rishabh Pant in the same over, his second, and then took out Harshal Patel in the very next over. RCB’s main strike bowler Yuzvendra Chahal, Mumbai’s bowling spearhead – Trent Boult and Kings XI Punjab’s experienced seamer Mohammed Shami occupy the third, fourth and fifth spots respectively. All have 20 wickets under against their names in 13 matches. 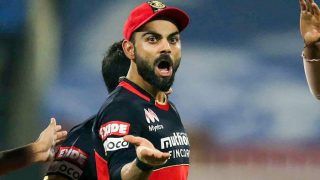