Before joining his team in the UAE, Gill did his pre-season at the Punjab state team nets under Yuvraj Singh's mentorship.

Hailed as the next-gen batting star of Indian cricket – Shubam Gill had already made a name for himself with his extraordinary talent, skill, and a wide repertoire of strokes which allows him to bat at any position. Gill will once again be seen in action for his franchise – Kolkata Knight Riders during the 13th edition of the Indian Premier League (IPL). In a freewheeling chat with PTI, Gill spoke on a range of issues including the pressure of expectations, his interactions with team co-owner and Bollywood superstar Shah Rukh Khan and his mentor Yuvraj Singh’s contribution during the offseason.

The 21-year-old Gill revealed that he would prefer to open the innings for his team if given the option in IPL 2020. In 2018 player auctions, KKR picked up Gill and since then the flamboyant batsman has aggregated 499 runs at an average of 33.27 and strike rate of 132.26 for the SRK co-owned franchise.

“If I was given an option, I would prefer to open the innings,” the 21-year-old answered when asked if he would like to go out there at the start with the explosive Sunil Narine.

A batsman to look forward to in the post-Virat Kohli-Rohit Sharma generation, Gill is considered one of the finest talents among his peers even keeping his U-19 captain Prithvi Shaw in mind.

Does it weigh too much when he is out there in the middle? “I don’t think it really weighs on me that much, because when I go in to bat the only thing that stays in the mind is how I would score runs in a particular situation.

“In my mind, the only goal is to win matches for whichever team I am playing,” added Gill, who has an impressive strike-rate of nearly 135 from 37 T20 games.

Gill feels that UAE tracks will have some kind of similarity with Indian pitches and the bat speed won’t change much considering the slowish nature of the wicket. The IPL begins on September 19. “No, I don’t think we need to change to any kind of specific bats (in terms of weight), because in India we are used to playing on slow pitches. You need to adapt and I believe I can play on all kinds of surfaces,” he said.

Before joining his team in the UAE, Gill did his pre-season at the Punjab state team nets under Yuvraj Singh’s mentorship. In fact, Gill is excited that the two time World Cup winner is making a comeback to competitive cricket.

“I think it will really be helpful for Punjab youngsters…We spent a couple of weeks with Yuvi Paaji. We were training with him and we also practiced (nets) with him.”

“There were a lot of things that we talked about not just on the field but, you know, some things off the field. It was overall a really good experience for us,” Gill, who attended the sessions along with Punjab teammates Abhishek Sharma, and cousin brother Anmolpreet and Prabh Simran Singh.

KKR principal owner Shah Rukh Khan is known to be a great motivator. So what has he told Gill that has stayed with him?

“I think when I first met him (SRK), and I think I was about to make my IPL debut in that match, he just came and told me ‘just go out there and express yourself’.

“For any youngster, if your owner of the team is telling you to express yourself without having the fear of being dropped or getting dropped. It’s a really big thing,” he concluded. 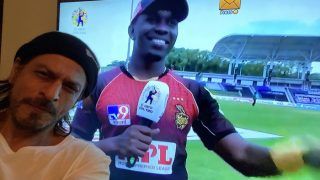