The CSK Twitter handle shared pictures of the players - who were all smiles - as they got ready to board the flight to UAE. After RCB and MI, MS Dhoni-led Chennai Super Kings left for UAE for the upcoming season of the Indian Premier League amid best wishes from fans. Eyes have been on CSK ever since Dhoni and Sureshaina announced their international retirement. The players wore their yellow jersey as they got ready to leave for UAE as scheduled.

The CSK Twitter handle shared pictures of the players – who were all smiles – as they got ready to board the flight to UAE.

Once they land in UAE, they will have to undergo a bio-security bubble to ensure the safety of players amid the pandemic.

Subsequently, the players and support staff will be tested every fifth day of the tournament.

Meanwhile, Sunrisers Hyderabad and Delhi Capitals will land over the weekend.

Sixty games will be played over 53 days across three venues Dubai, Abu Dhabi, and Sharjah. In 2014, UAE had hosted the IPL partially due to the general elections in India.

The postponement of the T20 World Cup in Australia created a window for the IPL, which was supposed to take place in March-May before the BCCI postponed it indefinitely due to the pandemic. 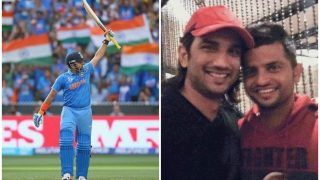