Board of Control for Cricket in India (BCCI) treasurer Arun Dhumal on Wednesday (September 2) made it clear that the Indian Premier League (IPL) 2020 will take place as scheduled, i.e. from September 19 to November 10.

Doubts about the 2020 IPL had arisen after 13 members of the Chennai Super Kings (CSK) tested positive for Coronavirus last month, and that led to speculation that the tournament might be postponed, depending on the COVID-19 situation in the UAE.

However, Dhumal said that everything was fine now in the UAE and the event would take place as planned.

“They all [CSK members] have come negative now. And the IPL will take place as scheduled; there is no doubt about that. Don’t worry, players are following the COVID-19 protocols and matches will be played without spectators. So, I don’t think there will be any problem with that,” Dhumal said.

The BCCI has also put on hold the release of the tournament schedule. Asked about it, the BCCI treasurer said the Board is in talks with the Emirates Cricket Board (ECB), “and hopefully the announcement will be made soon”. “IPL Chairman Brijesh Patel is also there in the UAE and he is working on it. The ECB is helping us in all the way possible. Just hope for the best,” he added.

It is also learnt that the BCCI could go for a change in the schedule it has reportedly prepared if it goes ahead with the already decided dates. In that case, the opening encounter of the tournament could be held between champions Mumbai Indians and the runners-up of 2018 edition, Sunrisers Hyderabad. It was expected the opening game would be between Mumbai Indians and 2019 runners-up CSK.

All eight teams have resumed training in the UAE, but CSK is yet to hit the ground running. They were quarantined after 13 members of the squad tested positive. They are likely to start training from September 4. 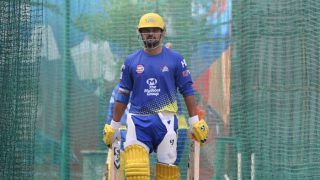