Mitchell Starc will not be part of IPL 2021, as the left-arm fast bowler has not registered for the auctions that are slated for February 18 in Chennai. As many as 1097 players have registered for the much-awaited IPL auction to be held in Chennai on February 18 with most entries coming from the West Indies (56) followed by Australia (42) and South Africa (38). Australia’s ace paceman Mitchell Starc will not be part of IPL 2021, as the left-arm fast bowler has not registered for the auctions by the deadline of February 4. Apart from Starc, England Test captain Joe Root, who scored a century in his 100th Test on day 1 of the series against India, did not register for the second season of the lucrative T20 tournament in a row.

Also called as the cash-rich T20 league – IPL offers handsome contracts to players around the world who eagerly await to ply their trade in the competition. In the upper bracket – the base price at INR 2 crore (US$ 274,000 approx.) – as many as 11 playerss have given their name. Former Bangladesh captain Shakib Al Hasan, Australia’s explosive duo of Glenn Maxwell and Steve Smith, India legend Harbhajan Singh are among the noteworthy names in the esteemed list.

The others who have listed themselves in INR 2 crore bracket are Kedar Jadhav, Moeen Ali, Sam Billings, Liam Plunkett, Jason Roy, Mark Wood and Colin Ingram.

Meanwhile, Dawid Malan, the world’s top-ranked T20I batsman but who is yet to make his debut in the IPL, set his base price at INR 1.5 crore ($206,000 approx.), as have Mujeeb Ur Rahman, Alex Carey, Nathan Coulter-Nile, Jhye Richardson, Mitchell Swepson, Tom Curran, Lewis Gregory, Alex Hales, Adam Lyth, Adil Rashid and David Willey.

Among others, Aaron Finch, Umesh Yadav, Hanuma Vihari, Marnus Labuschagne, and Sheldon Cottrell have all listed their base prices at INR 1 crore ($137,000 approx.).

Apart from Root, other England players who previously featured in the competition, Harry Gurney and Tom Banton also did not register. James Pattinson, part of the Mumbai Indians’ title-winning squad in 2020, also opted out.

The player registration deadline closed on Thursday and the list comprises 207 international players including 21 capped Indians.

Twenty-seven players will represent the associate nations and 863 uncapped cricketers, including 743 Indians and 68 overseas.

The number of uncapped Indians who have played at least one IPL game stands at 50 and two for overseas uncapped players.

“If every franchise were to have the maximum of 25 players in their squad, 61 players will be taken in the auction (of which up to 22 may be overseas players),” read the IPL statement on Friday. 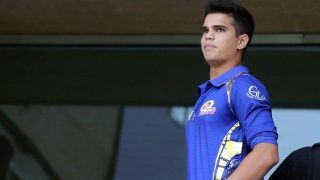 IPL 2021: Mumbai Indians to Chennai Super Kings, Franchises That Could Target Arjun Tendulkar in Mini Auction in February in Chennai