Australian fast bowler Jason Behrendorff has signed up with the Chennai Super Kings as a replacement for compatriot Josh Hazlewood for IPL 2021.

Three-time IPL champions – Chennai Super Kings have signed Australia fast bowler Jason Behrendorff as a replacement for compatriot Josh Hazlewood for the upcoming edition of the Indian Premier League, which begins on April 9 in Chennai. Hazlewood had earlier pulled out of the IPL 2021 edition to give himself ‘the best chance to be mentally and physically ready’ for the busy international season ahead. Hazlewood was the third Australian to pull out of IPL 2021 after Josh Phillipe and Mitchell Marsh.

This is Behrendorff’s second IPL stint after having represented Mumbai Indians in 2019. He played five matches and picked up as many wickets at that time. The 30-year-old left arm quick has featured in 11 ODIs and seven T20Is so far for Australia.

Hazlewood had earlier decided to withdraw from the cash-rich T20 league to take a small break from cricket and keep himself fresh for the Ashes and the T20 World Cup later this year.

Hazlewood played three games for CSK in the last season of IPL when the tournament was staged in the UAE in late 2020.

CSK will open their IPL 2021 campaign against Delhi Capitals at the Wankhede Stadium in Mumbai on Saturday.

Chennai Super Kings had a dismal show in Indian Premier League 2020 as they struggled throughout the season and failed to make it to the playoffs for the first time since 2008. 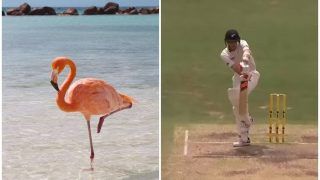 Not Virat Kohli or Rohit Sharma, Wasim Jaffer Predicts Player to Watch Out For in IPL 2021 Opener Between MI-RCB at Chennai