Kieron Pollard managed to lift MI to 150 for 5 with the help of a 22-ball 35 which included two sixes of the last two balls of their innings.

Sunrisers Hyderabad’s middle-order continued to misfire as spinner Rahul Chahar and pacer Trent Boult fashioned Mumbai Indians to a 13-run win in their IPL match at Chepauk on Saturday. Defending 150 on a tricky surface, leg-spinner Chahar – 3/19 – stifled the middle-order before Boult – 3/28 – polished off the tail as SRH were bowled out for 137 in 19.4 overs. Opting to bat, MI had a good start but Vijay Shankar and Mujeeb Ur Rahman claimed two wickets each as SRH stemmed the flow of runs in the middle overs. SCORECARD

However, Kieron Pollard managed to lift MI to 150 for 5 with the help of a 22-ball 35 which included two sixes of the last two balls of their innings. Chasing 151 for a win, Jonny Bairstow smashed a 22-ball 43 to give SRH a rollicking start, while David Warner too managed 36 off 34 balls but once the duo were back in the hut, the middle-order again failed to come to the fore. MATCH HIGHLIGHTS

Back at the top with his opening partner Warner, Bairstow amassed 18 runs from Trent Boult in the third over with the help of three fours and a six.

Adam Milne was then treated with equal disdain, sending him for two maximums and a four as he bled 19 runs. Krunal Pandya was then handed the ball but the result was the same as he conceded 13 runs with Bairstow and Warner smashing a six and a four respectively as SRH amassed 55 in 5 overs.

Kieron Pollard gets the Man of the Match award for his knock of 35* as #MumbaiIndians win by 13 runs against #SRH.#VIVOIPL pic.twitter.com/dlyyog6PIs

Bumrah then bowled a tight over but Warner sent Milne for a six as SRH reached 57 for no loss in powerplay. Lady luck smiled on MI finally when Bairstow hit wicket while looking for a slog sweep off Krunal.

Chahar handed SRH a twin blow in his last over, dismissing Virat Singh – 11 – and Abhishek Sharma – 2 — both playing their first games of the season.

Vijay – 28 runs off 25 balls – cracked two sixes off Krunal to keep SRH in the hunt but he kept losing his partners as Abdul Samad – 7 – was sent packing by Hardik with another direct throw and then Boult produced a perfect yorker to rid get of Rashid – duck.

Vijay too perished in the next over as SRH fell short once again to suffer their third successive loss.

Rohit completed 4000 T20 runs as a skipper and also surpassed Mahendra Singh Dhoni’s record of hitting the most number of sixes by an Indian in the tournament.

The 33-year-old now has 217 sixes in IPL, one ahead of Dhoni. He occupies third place in the overall list after Punjab Kings’ Chris Gayle – 351 – and Royal Challengers Bangalore’s AB de Villiers – 237. With Rohit and de Kock looking in full flow, it seemed MI will put up a big score.

However, MI soon slipped to 71 for 2 with Vijay Shankar dismissing Rohit and Suryakumar Yadav (10) in his two overs.

While the MI skipper holed out to Virat Singh in the sixth over, Suryakumar was caught and bowled in the 9th over. Rashid Khan and Mujeeb then tightened the screw on MI as the well-set de Kock next perished at deep mid-wicket.

With MI at 107 for 3 in 16 overs, Pollard clubbed one over mid-wicket but Mujeeb soon dismissed Ishan Kishan – 12 runs off 21 balls – with wicketkeeper Bairstow taking a fabulous catch.

New man Hardik Pandya and Pollard couldn’t produce their trademark hitting as the former holed out to Virat in the deep.

Pollard, who was dropped by Vijay in 19th over, ended things on a high, smashing the last two balls of Bhuvneshwar Kumar for two sixes. 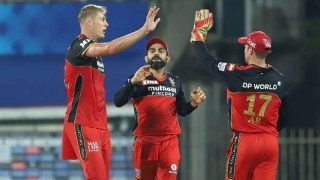