New Delhi: It was another match and another win for Chennai Super Kings and it’s contrasting for Royal Challengers Bangalore as they are yet to win a game in the UAE leg of the Indian Premier League. RCB have now lost 7 matches on the trot in the United Arab Emirates. CSK chased down the total with 11 balls to spare as all batsmen made some valuable contribution in the 157-chase. It was simply underwhelming cricket from Royal Challengers Bangalore after dominating the first 10 overs of the match. The win took CSK to the top spot with 14 points. They overtook Delhi Capitals, who also have 14 points, but the yellow brigade has better net run-rate of 1.185, compared to 0.613 of the Delhi team.

After Match 35 of the #VIVOIPL, @ChennaiIPL are back on the top of the Points Table whereas #RCB are third! #RCBvCSK pic.twitter.com/QwMaB3EWDG

There is not any change in the top 3 of the Orange Cap charts as Delhi Capitals opener Shikhar Dhawan continues to lead it with 422 runs in 9 matches. Punjab Kings captain KL Rahul is on the second spot with 380 runs in 8 matches, while Faf du Plessis replaces Mayank Agarwal in the the third position for scoring 351 runs in 9 matches.

Royal Challengers Bangalore’s medium pacer Harshal Patel remains at the top of the Purple Cap charts with 19 wickets from 9 matches, taking 2 wickets in today’s match against CSK. The second and third spots are acquired by Delhi Capitals’ Avesh Khan and Rajasthan Royals’ Chris Morris as both of them have claimed 14 wickets each. Arshdeep Singh who claimed a fifer on Tuesday night is now at the fourth position on the Purple cap list with 12 wickets. Mumbai Indians spinner Rahul Chahar is the only spinner in the top 5 with 11 wickets so far in the season. 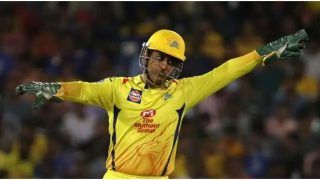