VIVO IPL 2021 Points Table, DC vs MI 2021 Scorecard: Check the latest points table after match no. 13 of the Indian Premier League between Delhi Capitals and Mumbai Indians and also see the IPL 2021 Orange Cap and IPL Purple Cap 2021 holders in the ongoing 14th edition of the T20 tournament.

IPL 2021 Points Table Today Latest, DC vs MI 2021 Prediction: Delhi Capitals finally managed to break the hoodoo against Mumbai Indians as they registered a clinical six-wicket win over the defending champions in match 13 of IPL 2021 at the Chepauk Stadium on Tuesday. Veteran leg-spinner Amit Mishra’s four-wicket haul coupled with a crucial 45 by experienced opener Shikhar Dhawan formed the cornerstone of Delhi Capitals’ win against Mumbai. Courtesy of the win, Delhi Capitals have climbed to the second spot in the IPL 2021 points table latest. Delhi have won three matches and suffered one loss out of four matches they had played in this edition so far. DC are second on the points table, just behind Royal Challengers Bangalore. Both teams have six points but RCB is ahead on net run rate and have played one match less compared to DC. MS Dhoni-led Chennai Super Kings are at the third position with two wins in three games. They boast a solid net run rate of +1.194. Meanwhile, five-time IPL champions Mumbai are at the fourth slot despite the loss against Delhi on Tuesday. MI have played four matches – won two and lost the same number of games.

Talking about the DC vs MI match, Mishra – 4/24 – spun his web around the Mumbai Indians batsman to restrict them to sub-par 137 for 9 after the defending champions decided to bat. Opener Shikhar Dhawan top-scored with a 45 off 42 balls as Delhi held their nerves in the final overs to chase down the target with five balls to spare. It was Delhi’s first win over MI in the last five meetings, having lost four times last season in UAE. Chasing 138 to win, Delhi lost opener, Prithvi Shaw, early as he gave a return catch to Jayant Yadav (1/25). Dhawan, who started with a cut short for a boundary, was joined by Steve Smith – 33 runs – as the two resurrected the innings by adding 53 runs for the second wicket. The two kept the scoreboard ticking while scoring the odd boundaries as Delhi were 39 for one after six overs. All-rounder Lalit Yadav – 22 not out – and West Indian Shimron Hetmyer – unbeaten 14 – held their nerves to took the side home.

Delhi Capitals opener Shikhar Dhawan has further strengthened his grip on IPL 2021 Orange Cap – most runs in the tournament. Dhawan, who holds the number one position Orange Cap list, played a 45-run knock versus Mumbai Indians on Tuesday. With that, Dhawan has taken his IPL Orange Cap tally to 231 runs in 4 matches. The left-hander has scored his runs at an impressive average of 57.75 and strike rate of 148.07. Dhawan is followed by RCB’s new recruit Glenn Maxwell who had so far scored 176 runs in three games at a staggering average of close to 59 and strike rate of nearly 150. Mumbai Indians captain KL Rahul – 157 runs in 3 matches and KKR opener Nitish Rana – 155 runs in 3 games – are at the third and fourth position respectively. MI captain Rohit Sharma is at the fifth spot with 138 runs in four matches.

Royal Challengers Bangalore all-rounder Harshal Patel – 9 wickets in three matches – continues to don the coveted IPL 2021 Purple Cap – most wickets in the tournament. Patel finished with impressive figures of 2/17 against KKR on Sunday to power RCB to a comprehensive victory. Meanwhile, Delhi Capitals pacer Avesh Khan, who picked up 2/15 against Mumbai Indians, moves to the second position in IPL Purple Cap list. Khan has eight wickets in four matches at an average of 12.87 and economy 7.35. MI spinner Rahul Chahar, who finished with figures of 1/29 against Delhi Capitals in match 13, is at the third spot with eight scalps in four matches. Chahar is followed by his MI teammate Trent Boult – fourth slot – who has six wickets in four matches. Rajasthan Royals young pacer Chetan Sakariya – 6 wickets in 3 matches – remains at the fifth position in IPL 2021 Purple Cap list. 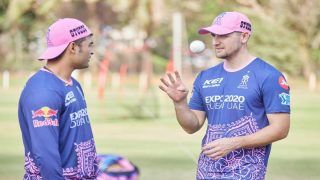