IPL 2021 Points Table, PBKS vs DC 2021 Scorecard: Check the latest IPL points table after match no. 29 between Delhi Capitals and Punjab Kings and also see the IPL 2021 Orange Cap and IPL Purple Cap 2021 holders in the ongoing edition of the T20 tournament.

IPL 2021 Points Table Today Latest, PBKS vs DC 2021 Prediction: Delhi Capitals openers Shikhar Dhawan – 69 not out – and Prithvi Shaw – 39 runs – starred with the bat as their side registered a clinical seven-wicket win over Punjab Kings in the match no. 29 of IPL 2021 at the Narendra Modi Stadium, Ahmedabad on Sunday. This was Delhi’s sixth win in eight matches they had played this season so far. Courtesy of the victory, Delhi have climbed to the numero uno spot in the IPL 2021 points table with an impressive net run rate of +0.547. DC now have 12 points overall. Meanwhile, Punjab Kings, who lost the match against Delhi, are lying at the sixth position with three wins and five losses in eight matches of IPL 2021. Virat Kohli-led Royal Challengers Bangalore are at the third slot with five wins in seven games – 10 points at a net run rate of -0.171. Three-time champions Chennai Super Kings hold the second position in the IPL 2021 points table with five wins in seven matches and a net run rate of +1.263. Defending champions, Mumbai Indians hold the fourth position – four wins and three losses out of seven matches they played this season.

Talking about the match 29 of IPL 2021 – Dhawan’s delightful 69 dwarfed Mayank Agarwal’s unbeaten 99 as Delhi Capitals defeated Punjab Kings by seven wickets on Sunday. Mayank, leading the side in the absence of regular skipper KL Rahul, used the straight bat effectively in his lone hand to take Punjab Kings to 166 for six. Delhi Capitals hardly broke a sweat in the run chase, cantering to victory in 17.4 overs, their sixth win in eight matches. For Punjab Kings, it was their fifth loss in eight games, summing up their inconsistent run so far. The destructive opening duo of Prithvi Shaw – 39 off 22 balls – and Dhawan – 69 not out off 47 balls – gave another flying start to Delhi who raced to 63 for no loss in six overs. Both struck delightful drives and punches on the off-side.

Delhi Capitals experienced opener Shikhar Dhawan continues to hold the number one spot in the IPL 2021 Orange Cap list – most runs in the tournament. Dhawan, who scored 69 not out off 47 balls, played second fiddle to Prithvi Shaw as the duo shared a 63-run stand for the first wicket. The stylish left-hander has scored 380 runs in 8 matches at an impressive average of 54.28 and strike-rate of 134.27. Shaw, who played an attacking knock of 39 off 22 balls, is at the fourth position in the Orange Cap tally. The Mumbaikar has taken his overall tally to 308 runs in 8 games which includes three half-centuries. Meanwhile, Punjab Kings captain – KL Rahul, who missed Sunday’s game due to acute appendicitis, continues to hold the second position with 331 runs in seven matches. Chennai Super Kings opener Faf du Plessis is at the third slot with 320 runs in seven games at an impressive average of 64.00. Rajasthan Royals captain opener Sanju Samson – 277 runs in seven games at an average of 46.16 – rounds off the top-5 in IPL 2021 Orange Cap tally. 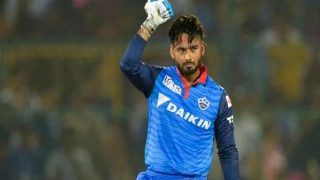