With 20 points in 13 matches, Delhi Capitals boosted their chances of finishing in the top 2 of the IPL 2021 points table and get an extra shot at reaching the final.

Shimron Hetmyer kept his nerves and played some fine shots under pressure to guide Delhi Capitals to a three-wicket win over Chennai Super Kings in a battle for a top-two finish in the Indian Premier League match in Dubai on Monday. Needing 28 from the last three overs to reach the target of 137, the Guyanese picked 12 runs against Dwayne Bravo and then got 10 off pacer Josh Hazlewood to bring down the equation to six runs from six balls. DC completed the job with two balls to spare despite losing Axar Patel. Hetmyer remained not out on a vital 28 off 18 balls, including a crucial six in the penultimate over. (MATCH HIGHLIGHTS)

Earlier, a disciplined performance by Delhi Capitals bowlers restricted Chennai Super Kings to 136 for five despite a 43-ball 55 not out from the seasoned Ambati Rayudu. The flashy Prithvi Shaw smashed three boundaries in seven balls to get the DC innings going but, while trying to go for one too many, the Mumbaikar threw his wicket away when he failed to negotiate Deepak Chahar’s extra bounce and Faf du Plessis ran backwards from mid-off to complete the catch. (SCORECARD)

Josh Hazlewood bowled a tight fourth over, conceding just three runs, but Shikhar Dhawan (39 off 35 balls) clobbered Chahar for two sixes and as many fours to get 21 in the fifth over. However, Hazlewood cut short Shreyas Iyer’s (2) brief stay in the middle when he could not execute a pull shot.

Ravindra Jadeja sent back Rishabh Pant (15) when the DC skipper tried to sweep a quicker delivery from the left-arm spinner.

Debutant Ripal Patel hit two fours as DC required 53 from 54 balls, but Jadeja came back to get the better of the new man from Gujarat.

R Ashwin too followed suit and when Dhawan, three balls after getting a decision against him overturned through a review, played Shardul Thakur to cover in a soft dismissal, DC were in trouble at 99 for six at the end of the 15th over.

For his impressive performance with the ball, @akshar2026 won the Man of the Match award.👍 👍 #VIVOIPL | #DCvCSK | @DelhiCapitals

Thakur returned excellent figures of 2/13 in four overs, while Jadeja had 2/28.

Substitute fielder K Gowtham dropped Shimron Hetmyer at a crucial stage of the game, the ball instead going past the ropes.

Earlier, Rayudu reached his fifty when he slashed Anrich Nortje over point for a boundary, following a six over deep extra over in the innings’ 19th over, from which CSK scored 14 runs.

However, Avesh Khan bowled a fantastic final over in which he conceded only four runs while taking the wicket of Mahendra Singh Dhoni (18). Rayudu smashed five fours and two sixes during his stay in the middle.

A major part of DC’s bowling effort was a far cry from pacer Nortje’s horrendous first over when he conceded 16 runs, with nine off them coming off a leg bye and a bye that Rishabh Pant couldn’t get his hand to despite a diving attempt.

In between, Ruturaj Gaikwad was given out lbw, but the decision was overturned after the batsman reviewed as TV replays showed the ball was missing the leg stump.

Faf du Plessis got two boundaries on either side of the wicket against Avesh Khan as CSK raced to 26 in only two overs at the Dubai International Cricket Stadium.

There was swing on offer but DC’s bowlers were not able to get their act right until left-arm spinner Axar Patel (2/18) struck when du Plessis’ attempted pull shot was held by a diving Shreyas Iyer in the deep mid-wicket region.

The in-form Gaikwad welcomed Kagiso Rabada with a drive straight down the ground, even as Robin Uthappa, playing this game in place of Suresh Raina, walked into the middle.

Nortje removed Gaikwad in the fifth over when the batsman failed to connect his pull shot for Ravichandran Ashwin to complete a neat catch. 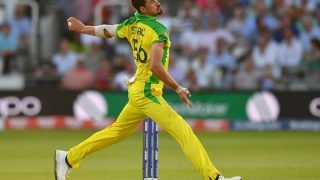 Mitchell Starc Copped a Lot of Flak Last Summer But Nobody Knows What Was Going Behind the Scenes: Alyssa Healy 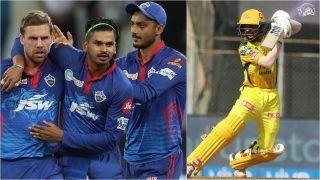