It was Delhi's first win over Mumbai in the last five meetings, having lost four times last season in UAE.

Experienced leg-spinner Amit Mishra’s four-wicket haul coupled with a crucial 45 by opener Shikhar Dhawan formed the cornerstone of Delhi Capitals’ six-wicket win over Mumbai Indians in an IPL game at the Chepauk stadium on Tuesday. Mishra – 4/24 – spun his web around the Mumbai Indians batsman to restrict them to sub-par 137 for 9 after the defending champions decided to bat. Opener Shikhar Dhawan top-scored with a 45 off 42 balls as Delhi held their nerves in the final overs to chase down the target with five balls to spare. SCORECARD

It was Delhi’s first win over MI in last five meetings, having lost four times last season in UAE. Chasing 138 to win, Delhi lost opener Prithvi Shaw – 7 runs – early as he gave a return catch to Jayant Yadav – 1/25. Dhawan, who started with a cut short for a boundary, was joined by Steve Smith – 33 runs – as the two resurrected the innings by adding 53 runs for the second wicket. MATCH HIGHLIGHTS

The two kept the scoreboard ticking while scoring the odd boundaries as Delhi were 39 for one after six overs.

Smith, who hammered two fours off Krunal Pandya in the 9th over, was the aggressor but a lapse in concentration saw him back in the hut as Kieron Pollard trapped him in the 10th over. Dhawan, who hammered five fours and a lone six, and Lalit Yadav – 22 not out – kept Delhi in the hunt.

With DC needing 48 runs from the last six overs, Dhawan smashed a six and four to bring up the 100 before perishing in the 15th over with Krunal Pandya taking a diving catch in the deep. Skipper Rishabh Pant – 7 runs – also fell cheaply with Delhi still needing 23 runs. Yadav and West Indian Shimron Hetmyer (14 not out) then held their nerves to took the side home.

Hetmyer cut Kieron Pollard on the first ball of the final over to get his team on a cusp of a win and the game ended when the bowler overstepped next.

Earlier, Mumbai suffered a middle-order collapse on a sluggish Chepauk track after they were 67 for 2 at one stage as Delhi led by Mishra – 4/24 – made a spectacular comeback. Opting to bat, Mumbai lost opener, Quinton De Kock, early, who edged a Marcus Stoinis – 1/20 – delivery to Pant in the third over.

Suryakumar Yadav – 24 runs – then joined Rohit Sharma – 44 runs, who got his first boundary an elegant drive, which raced to deep extra cover fence in the third over. The duo rallied the innings with their 58-run stand. Rohit took on ace off-spinner Ravichandra Ashwin – 0/31 – in the 4th over which fetched 15 runs.

The Mumbai skipper hammered a boundary and a maximum a loft over extra cover, while Surya also got one boundary, courtesy an outside edge.

Rohit then hit Kagiso Rabada – 1/25 – for a six over long-off. Surya then hit successive fours off Mishra as Mumbai raced to 55 for one after six overs. However, Delhi pegged back the defending champions by grabbing three quick wickets.

First Avesh Khan – 2/15 – dismissed Surya, who nicked one to Pant and then Mishra removed Rohit and Hardik Pandya – duck – in the 9th over as Mumbai slipped to 77 for 4. Both Rohit and Hardik holed out at long on.

Mumbai then lost half its side for 81 as Krunal Pandya – 1 – chopped an under-cutting arm ball by Lalit Yadav – 1/17 – onto his stumps. Mishra then used his googly to trap Kieron Pollard – 2 – in front of the wicket, as MI was teetering at 84 for six.

In the end, a responsible 26 from Ishan Kishan, who became Mishra’s fourth wicket, coupled with Jayant Yadav’s 23 took the side beyond the 125-run mark. 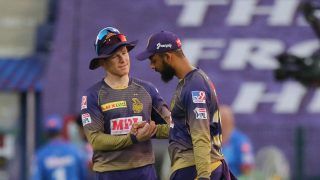 IPL 2021: Why Shine is Missing From Knight Riders' Armour