RR beat RCB in that match by 29 runs

Rajasthan Royals (RR) had a fabulous season of the IPL 2022 as they finished runners up. The Men in Pink will be disappointed that they didn’t win the title, but they can hold their head high given the performance they delivered. Jos Buttler and Yuzvendra Chahal were the two top performers from the team, with the former getting the Orange cap and the spinner bagging the Purple cap.

There were other positives for the team as well, with players like R Ashwin, Kuldeep Sen, Prasidh Krishna and Riyan Parag delivering satisfactory performances. Riyan Parag didn’t get a lot of opportunities to bat but was electric in the field. He scored 183 runs in 14 innings, including a match-winning half-century against RCB.

Parag scored 56 off 31 balls and helped RR post a challenging 144, which they later defended. However, the match hogged the limelight due to all the wrong reasons as Parag had an altercation with Harshal Patel and RCB players. The youngster has now opened up on the incident and revealed what actually transpired.

“Last year, Harshal Patel had dismissed me when we were playing against RCB. I was walking back. Then, he made a hand gesture telling me to go away. I didn’t see that on the spot. I saw that when I went back to the hotel and saw the replay. It stuck in my mind since,” Parag recalled as he narrated the incident during a gaming stream on Rooter.

“When the innings ended, Siraj called and said, “Hey, come here, come here’. He said, ‘you’re a kid, behave like a kid’. I told him, ‘bhaiya, I’m not saying anything to you’. By then, players from both the teams came and it ended there. Later, Harshal didn’t shake my hand. which I thought was a little immature,” Parag further said. 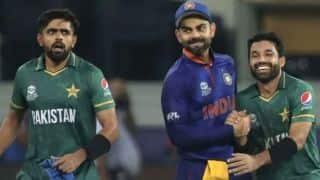